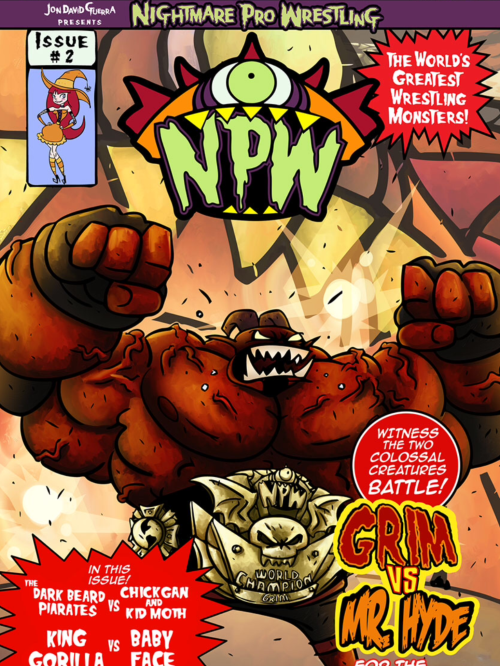 I’m not sure how I stumbled upon Nightmare Pro Wrestling, but I’m glad I did. Jon David Guerra is an awesome artist. Like many other artists that like to share their work online and give things we love a new twist, he’s taken to mashing things up with pro wrestling the same way Ramon Villalobos and Mike Kendrick have done. In this case, mashing up the world of professional wrestling with every type of monster from the Universal classics to the Japanese Kaijus. 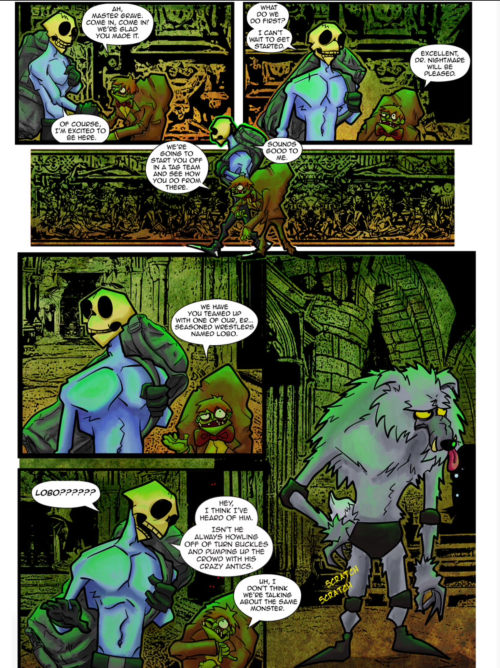 As if you couldn’t tell from the visual style, Nightmare Pro Wrestling isn’t Severed or Locke & Key. The writing is more on par with what you’d find on a Cartoon Network show. That’s not dissing Jon David Guerra. Even though I did kind of shit on Uncle Grandpa, but I’m talking more about shows that appealed to me when I was younger, like Dexter’s Laboratory, because I’m old and obligated to not be able to relate to what children watch nowadays. Nightmare Pro Wrestling is good fun. And much like the product it’s emulating, it’s sticking to its PG sensibilities. So, no Garth Ennis’ Crossed type of physical and mental trauma here. I’d be lying if I didn’t say I was kind of disappointed that no monster wrestler was decapitated or eaten by another monster wrestler.

The series follows plucky newbie, Grave Digger. He’s been accepted to the NPW and is anxious to make a name for himself while trying to wrestle his way out of the much larger shadow of his father, Skull. He’s also been saddled with sad sack jobber, Lobo, as his tag team partner. Along the way he draws the ire of The Horde, the monster Four Horsemen equivalent, by turning down their offer to join them. 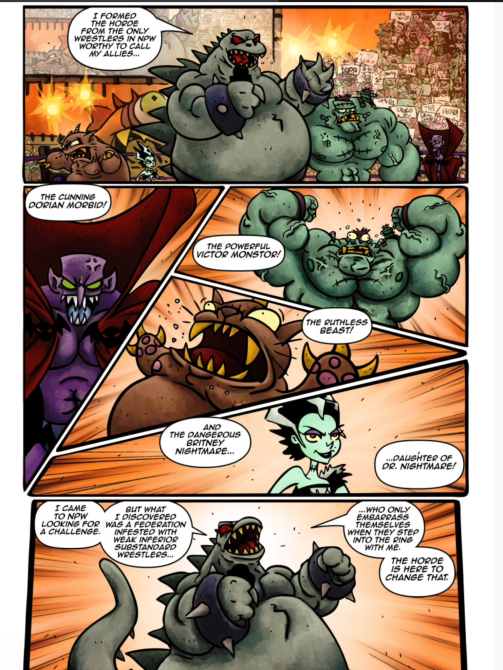 There’s also Grim, the John Cena of NPW (?). Although, he’s not as “polarizing” as Cena. The NPW Universe definitely digs him. He’s steroid huge and the NPW Champion. And also The Devil. Or one of The Devil’s other favorite demons.

As for actual monster wrestler stand-ins, you have King Gorilla as an over-the-hill certain hall of famer who wears yellow trunks, brother, and has a penchant for posing in a most familiar way. And “Gorgeous” Benjamin Ratfang who is basically Ric Flair as a rat. In case your mind ever wandered down that road less taken and briefly considered what an anthropomorphic rat dressed as and acting like Ric Flair would look like, NPW will no doubt satisfy that curiosity. Hell, Uncle Grandpa showed us what Ric Flair as a pizza would look like. Why the hell not a rat? 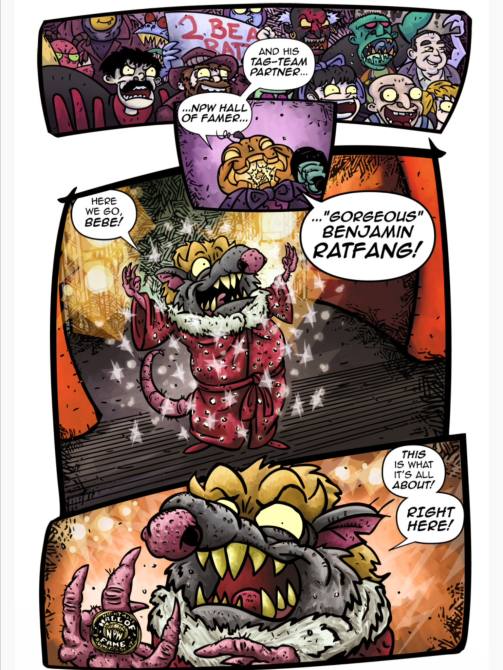 The entire five-issue run can be found on the Nightmare Pro Wrestling website or if you’re not into the whole digital thing, you can order the physical copies off the site. There’s other cool things you can buy like Jon’s Monday Night Draw sketchbook, which features pretty damn cool visual recaps of previous episodes of Monday Night Raw, like Damien Mizdow spray-tanning The Miz’ ass. For the Halloween season he’s also selling prints of supernatural-gimmicky wrestlers. You know, like the ones I covered on this site.