While I’m sure there’s quite a bit of manga and anime based on wrestling, or puroresu, they’re not all easy to come by. Luckily, thanks to my Hulu Plus subscription, I stumbled across the oddly sexually-charged, hard-hitting, competitive world of joshi wrestling that is Wanna be the Strongest in the World. And it was a lot better than I expected.

This show is basically the story of ACT Yasukawa, but with a much happier ending. Although, here’s hoping we haven’t seen the last of Yasukawa. Oddly enough, Yoshiko, the immature brat who went rogue on Yasukawa, makes a cameo in one of the episodes.

Sakura Hagiwara is the standout performer of the pop group Sweet Divas. And while their success is based on a reality show, like WWE’s Total Divas, the difference here is that it’s an American Idol type of reality competition show. Although I’m not sure how it works because other than declaring one of the divas a winner, no one seems to get eliminated. They just keep touring together. While shooting something for their Sweet Divas show with the women’s wrestling organization, Berserk, Sakura, and her fellow pop idol Elena Miyazawa, are ridiculed by the women wrestlers. So, really, the story is like The Bella Twins’ plight of constantly defending their reality show background against actual women wrestlers. Yet, the storyline in Wanna Be the Strongest in the World is well crafted, and in 12 half-hour episodes did a better job building up this feud than the WWE did with the Bellas and AJ Lee and Paige.

This anime does as much justice for animated pro wrestling, or pro wrestling in pop culture, as it does for joshi, or women’s pro wrestling in general. It’s simple storytelling concerning personal matters settled in the ring. Jim Ross would love it. And the moves! You have tiger, dragon, and almost every other variation of the suplex being used. But as much as the show progresses the art of women’s wrestling, it also takes a giant leap backwards in the representation of the women. Even though women wrestlers in Japan are not as homogenized as the ones we see on WWE TV, the majority of the female grapplers on Wanna be the Strongest look like anime versions of Eva Marie.

Sometimes you’re distracted from the matches because of the many gratuitous shots of, what YouTube reviewer DayShawnrShow eloquently puts, “That ass…” And when it’s not that ass, it’s the boobs. You’ll get a well animated visual of how devastating a backdrop suplex can be… to a woman’s boobs as they bounce from the impact. Or if there’s a submission hold applied somehow the camera ends up displaying the effects of this hold on a woman’s crotch. It’s kind of weird seeing as it doesn’t add to anything. Much like the couple of random instances in which Sakura’s bare breasts make an appearance, one of which includes them being fondled by other Sweet Divas members while in the shower. For no reason whatsoever. It doesn’t lend itself to the story at all. There’s no lesbian relationship, or some kind of sexual blackmail storyline, just a couple of cartoon boobs to reward male viewers for putting up with watching a show about women wrestlers, I guess.

Sadly, with bare boobs in place, the show gets an MA rating. Which sucks for young female wrestling fans because nudity aside, Wanna be the Strongest in the World would probably make for a great empowering show for girls. None of the storylines concern themselves with love interests, or whether or not girls are pretty enough or some other superficial shit, it’s about proving how tough they are and following through on promises that they make to themselves. It’s a really good story.

When challenged by Rio Kazama, Sakura loses her first match which just happens to be a “cabellera contra cabellera” match and immediately becomes endearing to me and my lucha libre sensibilities. After cutting her hair, Sakura then endures a losing streak befitting  Duane Gill before finally defeating Kazama in their rematch. And the rematch is probably one of the best fictional animated wrestling matches you’ll ever see. A lot of the matches on Wanna be are, but this one in particular is great. It’s probably the second-best match of the entire series. It’s the closest thing I’ve ever seen to a “real” professional wrestling match that wasn’t taking place at a wrestling event. The pervy creators definitely did their homework concerning the intricacies of in-ring storytelling. Plus, the piano score that accompanies this match and others when things don’t look good for Sakura almost pushes this show to Fantasia levels of performance art. Almost.

With her newfound success as a wrestler, Sakura decides to actively pursue this new career. Her best friend and former Sweet Divas stablemate Elena Miyazawa secretly wants her back in the pop idol group. This all leads to her training on the low and trading the persona of the masked Blue Panther (not to be confused with the lucha legend) with her mentor Miyabi, in order to coerce Sakura into a match. With the added stipulation that if Sakura loses she has to go back to Sweet Divas. The match is as hard hitting as any match you’d expect to come from Japan. Despite having wrestled way more matches, Sakura has trouble defeating Elena, but she ultimately does. Elena also reveals herself to Sakura mid match. 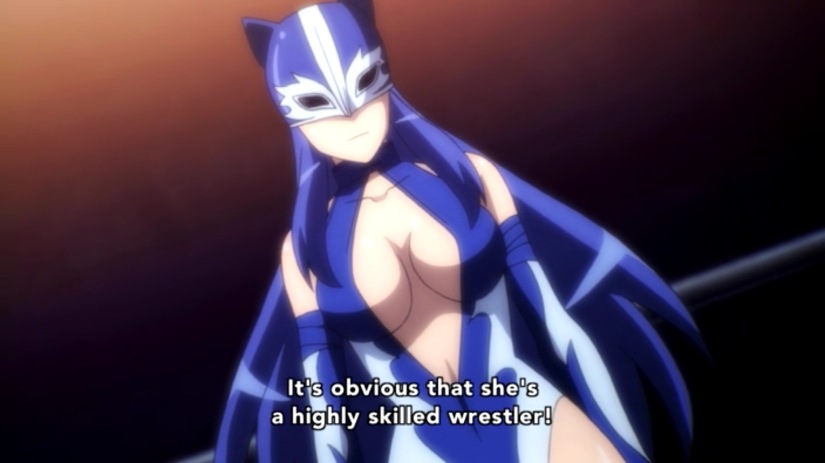 Despite losing, Elena pleads with her frenemy to return. So much for staying true to pre-match stipulations. Surprisingly, the crowd agrees with Elena. “Fuck your attempts at finding another calling in life. Stick to the established thing that we’re most comfortable with you being in,” is what I think they chant at her in Japanese. The rest of the Sweet Divas come out and also attempt to guilt Sakura back into joining. The Beserk girls then make their way out and if you think this is heading towards a “Lumberjill” rematch, you’re way off. They simply ask Sakura to stay. I’m sure the added mainstream popularity of Sakura boosted the numbers of asses in seats for Beserk. You can’t blame them.

Jackal Tojo, the undefeated champion of Wanna be, complicates things even more by offering Sakura a spot in her promotion Shangri-La. No, not the Shangri-La that Vince McMahon shoved Torrie Wilson in to make out with her, but a rival women’s wrestling league where only the best compete. Jackal tells her to do both and what Jackal says goes.

2 thoughts on “Wanna Be the Strongest in the World”