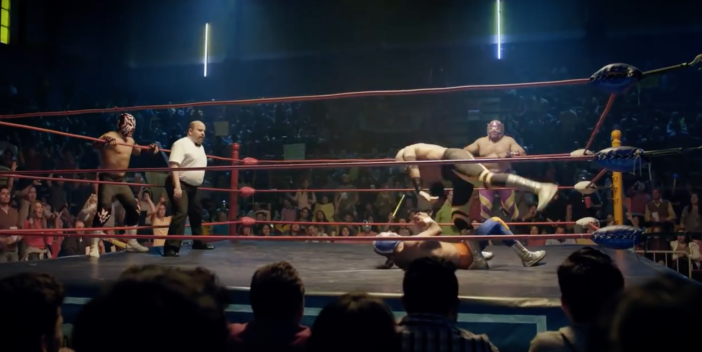 The commercial opens up with a tag team lucha libre match. They immediately lose points for it not being a traditional lucha libre six-man tag match. You’d think a commercial about a smart phone that relies heavily on Google would be more detail oriented. Anyway, at least we get one sweet lucha arm drag before we cut to the main reason that this commercial is happening.

The guy who everybody is helping make look strong is El Gato Loco. WWE’s Battle Kat’s Mexican bastard son. Seriously, he even kind of has on the same color scheme. He’s really over with the crowd, except for one girl in particular.

She figures out El Gato Loco is her ex-boyfriend. As if she didn’t know he was a wrestler. Seriously, what was she doing there with her friend? They’re clearly not even wrestling fans. They’re the only ones not cheering. Like they’re too damn cool for all of this. I know it’s no Lucha Underground, but white girl with dreads seriously thinks she’s too cool for lucha libre. Even though it’s obvious she was there specifically to keep tabs on her ex. Who’s her dad? Barry Windham circa his WWE 1996 run?

So she ID’s El Gato Loco to her friend proving that it is indeed, Robbie (probably short for Roberto). But since she definitely knew that he wrestled, and who he wrestled as, it was probably just an excuse to show off her new phone to her friend. She definitely seems like the type.

1 thought on “Paid for by the Following: Android Google Photos App”