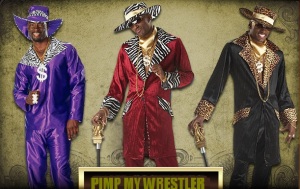 Not long ago I caught an episode of Legends of Wrestling on YouTube, titled the “Soul of Wrestling”, which was their way of saying black wrestlers. It’s funny, I get that the word “soul” has a close connection with the black community, but it kind of felt like when people use “urban” when they really want to say is black. It’s these terms that people like to use in hopes of being politically correct, but really failing miserably at it. Black president or not, race will always will be a sensitive matter… within the real world that is. However, within the confines of pro grappling little progress has been made in terms of African-American portrayal.

Now, I wouldn’t say that the forefathers of the pimp gimmick started out with “Soulman” Rocky Johnson, Junkyard Dog, or Koko B. Ware, but when you consider the funk/soul entrance music and the dancing (which your body pretty much gives into when coming out to this music) you can’t help but notice a connection. A connection which was furthered by the exploitation of the word “soul” or “funky”, and how it remained constant throughout the years, if not directly then by suggestion. The Godfather’s name was obviously derived from James Brown’s nickname, the Godfather of Soul; the Ho Train catchphrase was a play on Soul Train (R.I.P. Don Cornelius), thus keeping intact all the traits necessary for a successful pimp (or slightly pimpish) wrestler; funky soul music, dancing, and some dancers (or hoes). And thanks to Koko B. Ware, loud-ass clothing: 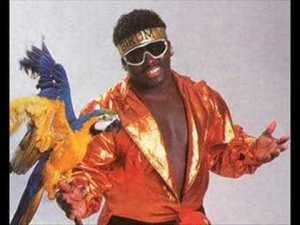 The first black wrestler with pimp-like characteristics to reach mainstream status was actually a manager.

The WWE wasn’t outright about Slick being a pimp, but with a name on par with Fillmore Slim from American Pimp, Slick definitely had a way about him that screamed greasy, two-bit pimp. Especially when he cut an interview like this. And after watching his music video for “Jive Soul Bro” you’d also learn that he had a penchant for generic KFC and doing women dirty (and not the good kind of dirty). He was pretty much what Vince’s idea of black people were after watching a few blaxploitation films a few years too late. Aside from managerial treachery, the Slickster didn’t make much of an impact aside from providing some comedic moments, managing the Twin Towers (never forget), becoming a minister and doing a bit of missionary work as he tried to civilize Kamala. Far from being a candidate for NAACP’s Image Award, I’m sure we all couldn’t help but smile a little when “Jive Soul Bro” hit the speakers during the 1,000th episode of Raw where minister Slick presided over AJ and Daniel Bryan’s wedding nuptials.

Next up, Flash Funk.

Poor Too Cold Scorpio, either too later to the party or too soon. He arrived in WCW after they dropped the Light Heavyweight Championship, and his gimmick was before its time in a pre-WWE Attitude Era. Would he have done a better job than The Godfather is a debate I’m sure wrestling pundits still struggle with to this day. Although it was obvious from his time in ECW that he could work blue. Armed with a limited high-flying style, thanks to the WWE, and a pair of Funkettes, Flash Funk was PG-Pimpin’ before Brodus Clay started dancing to “Somebody Call My Mama.” It wasn’t until the second (?) ECW invasion angle that the WWE fans were treated to what Flash Funk could do inside the ring when he wrestled Sabu on Monday Night Raw, but by then WCW had already been supplying every wrestling fan’s cruiserweight fix.

And speaking of WCW…

Veering more towards Soul than Funk, The Cat Ernest Miller found some short-lived success in WCW much the same way Diamond Dallas Page did, by being Eric Bischoff’s friend. Originally a martial arts master, The Cat used his skilled feet to produce some fancy footwork, took a page from Butch Reed’s book on hair tips (much like Shelton Benjamin later did) and transformed himself into a jive-talking, dancing fool. However, unlike his other pimp-like wrestling counterparts, Miller was more obsessed with dancing alone than he was with dancing with or pretending to pimp them for that matter. Since he was in WCW during its heyday of pissing away money, his greatest claim to fame came about during one of the SuperBrawls (when the pay per view logos started looking shitty) when he and James Brown performed (?) together to the delight of very few.

With the Monday Night Wars going strong and WWE throwing caution to the wind, they decided to stop being so subtle with their ideas of a what a pimp wrestler was and gave the fans The Godfather: 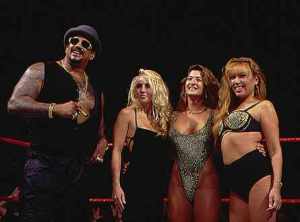 And they sure as hell went all out, hiring random dancers from local strip clubs to come out as hoes, getting Ice-T to sing The Godfather’s entrance theme at Wrestlemania 2000 (suck on that James Brown!) AND providing us with Howard Finkel bellowing out “ICE-T!” at a Wrestlemania. If ever a wrestler that came about during the right time in the right place it was definitely Charles Wright. The Godfather character was so popular they even gave him an Intercontinental Title run, but considering it was now the Attitude Era it didn’t really mean much. The bar set by The Godfather not only shattered the glass ceiling, but this character had such a high peak that the only way to go was down. Back down to PG-Pimpin’:

The Funkasaurus Brodus Clay was a mish-mash of almost every aforementioned name in this article. They even gave him The Cat’s old WWE music, and provided him with some , , dancers aptly called The Funkadactyls because Skankasauruses wasn’t going to fly in this day and age. While enjoyable at first, which is the case for most dancing fat wrestlers (see Rikishi and the Blue Meanie), Clay’s stock took a nose dive when A) they brought out the dancing mamas at Wrestlemania 28 to perform with him, giving them much more time than Daniel Bryan vs. Sheamus and B) he started going over Dolph Ziggler cleanly. While he currently might be one funkadactyl short, it is clear that pro wrestling, or WWE to be more precise, will never be short of black wrestlers portraying pimp-like characters, even if it means making them kid-friendly.

3 thoughts on “The Pimp Wrestler”