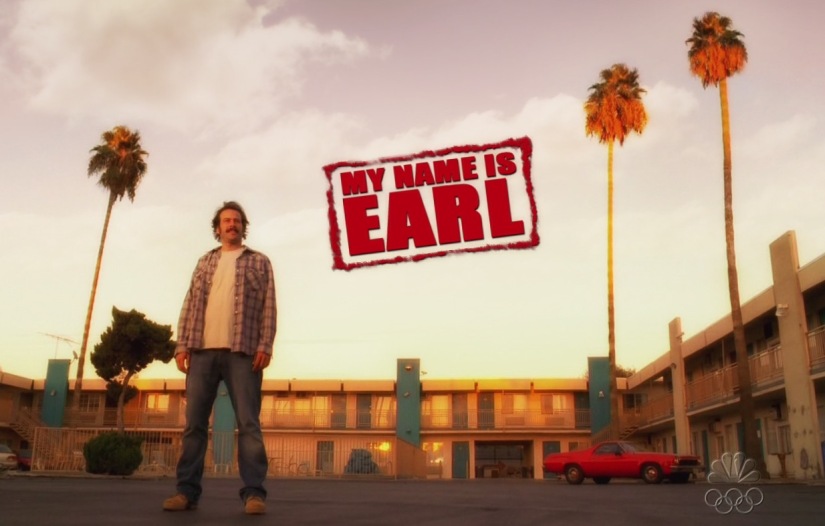 Unlike most sitcoms, My Name is Earl had a high concept which centered on this low-life dude who wins the lottery, but then immediately gets hit by a car. Having learned what karma is, Earl creates a long list of all the people he’s ever wronged and plans to use his money to right those wrongs. In this episode he helps a woman become a Black Lady of Wrestling and also have a baby.

Liberty Washington (played by the very underrated Tamala Jones) is on Earl’s list because he had previously stolen her identity and committed credit card fraud. He figures out that Liberty wants a baby with her husband, and sometimes wrestling heel manager, Ray-Ray, but doesn’t want to mess up her chances of becoming a professional wrestler. Joy, Earl’s ex-wife, is looking to get pregnant in order to keep from going to jail. Earl tries killing two birds with one stone, but the girls have a deep-seeded hatred for each other so it’s not going to be easy. Oh yeah, Liberty is also Joy’s unacknowledged half sister. Before the main match on the show we get a brief glimpse of Liberty and Ray-Ray’s schtick. She plays Lady Liberty, an All-American wrestler, who always seems to be fighting a racist wrestler aptly named The Klanimal. Klanimal’s manager is the evil Da Man, played by Liberty’s husband, Ray-Ray (who’s white and played by DJ Qualls). He draws instant heel heat by proclaiming that Martin Luther King Jr. Blvd. should be Wayne Newton Ave. Racial prejudice or not, no one’s going to choose Wayne Newton over MLK. It was kind of surprising to see that the predominantly white Camden County wrestling audience actually siding with the black female wrestler against a very out-in-the-open Klan member. Perhaps it was too much racism even for them. Also, it probably helped that Lady Liberty was named exactly that and looked like an American Gladiator. Because American wrestling fans will jump at any opportunity to chant USA, even when two non-American wrestlers are in the ring. Which reminds me, I wish I would’ve seen this episode before making my 10 Count list of the top All-American fictional wrestlers, because Lady Liberty definitely would’ve bumped Sheen Genus off the list.

It’s always interesting to see where a show, that is essentially based on working class/low-income white folk, goes with their representation of wrestling. In most cases, it’s treated as something real, like in Mama’s Family, Roseanne, Trailer Park Boys, and Married with Children. Here, they clearly acknowledge how fake it is by breaking kayfabe and showing us that Da Man is actually married to Lady Liberty. There’s also a scene where Liberty meticulously goes over a sequence of moves with Earl’s brother, Randy. And I mean “Macho Man” Randy Savage levels of meticulous. Ethan Suplee, the guy who plays Randy, is pretty much a pro at being in sitcom episodes featuring wrestling having played Vader’s son, Frankie Stecchino, on Boy Meets World (which I’ve yet to review). Playing the character of Da Man is just too much for Randy to take, especially after ordering Liberty to the back of the bus, and getting showered with both boos and trash afterwards. I’ll give My Name is Earl props for showcasing how easily wrestling promotions will insult their fans’ intelligence and make changes to their characters without acknowledging it, like how Da Man was now a big bumbling white guy instead of a tall, gangly white guy. Also, for anybody keeping track at home, this marks actor DJ Qualls’ second wrestling-related performance. The other taking place in the film most Donald Trump supporters require as mandatory viewing, Delta Farce, which was released in theaters the same year this wrestling episode premiered. Proving 2007 was the best year for fans of DJ Qualls and pro wrestling.

Back to the main match. So, this is Liberty’s audition match, not a try out, in front of Mr. Saticoy, the owner of BLOW. It’s her one chance to move up to the pros from the amateurs. And yes, in My Name is Earl, independent wrestling is referred to as amateur wrestling, which probably confused a lot of people considering it was taking place in a high school gym. And if you thought BLOW was the puntastic acronym for the Beautiful Ladies of Wrestling, think again. For whatever reason, BLOW stands for the Black Ladies of Wrestling. I’m not sure if the show was simply lampooning the cultural insensitivity that pro wrestling has always promoted. Like, how the show was obviously poking fun of the racial politics of wrestling with the Lady Liberty character being black and fighting her arch rival, Da Man and the half-KKK member, half beast, Klanimal, but I’m not sure what the purpose of having an all-black female wrestling league was for. Especially, when you consider that its owner, Mr. Saticoy, was very pimp-like. But more on that later. Joy plans to ruin Liberty’s chances of landing a contract with BLOW, so she decides to jump Liberty’s actual opponent, and don the costume of the cross-burning uber heel herself. Liberty tries to call it in the ring, but instantly gets slapped by Joy. Joy then proceeds to rip off every artificial strand of hair on Liberty’s face, from her fake eyelashes, to her weave. A de-weaving, if you will. To which Mr. Saticoy says, “you can’t fake that.”

Joy goes for a clothesline, but Liberty ducks it and takes her down. From there it goes back and forth, until Joy takes control again. Mind you, throughout the entire mach the girls are airing their grievances and not calling spots. Which is a nice change of pace. Imagine one of Botchamania’s “You Talk Too Much” segments featuring John Cena complaining to Daniel Bryan about being pressured into marriage by Nikki Bella because of Daniel Bryan’s engagement to Brie, instead of John Cena calling for a “drop down, leap frog, hip toss.” It’d be great. Joy sets Liberty up for a somersault flip off the second rope, which means she was either secretly training to be a pro wrestler before this, or maybe it’s in their blood. She misses it, and Liberty mounts her as if she’s going to put Joy in a camel clutch, but instead just repeatedly punches her back while continuing to air her grievances, which mostly centers around her dad’s absence in her life because she was a secret love child. I guess wrestling is less taxing, both emotionally and physically, than actually going to therapy.

In between the ass-whooping, Joy ends up feeling sad for Liberty and her unresolved daddy issues. She goes to hug her, but Liberty hoists her ass up and dumps her outside the ring and onto a table. Surprisingly, the table breaks despite it being one of those plastic party rental tables, and Joy weighing 125 pounds, at most. Backstage, Liberty and Joy are healing their wounds and having a heart-to-heart. Liberty recognizes how it was wrong of her to take it out her frustrations on Joy, when Joy had no idea they were even half sisters. Then, Earl arrives with Mr. Saticoy, who promptly greets them with a “Hey, bitches.” Further perpetuating the fact that he might indeed be a pimp wrestling character. He tells them that if they can pull off what they just did in that match three times a night, he’ll make them both BLOW girls. THREE TIMES A NIGHT? Not even the WWE in its Hulkamania heyday made the wrestlers work that much. Joy declines the offer, even though her character has the potential to be the biggest drawing heel in an all-black female wrestling promotion. Instead, she decides to offer up her surrogacy to Liberty, which is great for her, but probably not for Liberty, since there’s a really good chance that BLOW is just a front for a prostitution ring.

3 thoughts on “My Name is Earl”