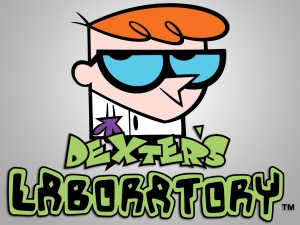 One of the WWE’s most popular wrestlers right now, Daniel Bryan, is the personification of what it means to be a true underdog. And if we’ve learned anything from wrestling and every sports movie ever made, ever, is that people like a good underdog story. That’s why it only seemed fitting to write about a particular episode of the once-popular Cartoon Network show, Dexter’s Laboratory.

Though Dexter’s Laboratory was directed towards younger kids, like most of the new cartoons from Cartoon Network at the time, including Johnny Bravo, much of the style and humor was popular among high school kids. Personally, when I was in high school I didn’t seek them out, but when they were on, I watched. Plus, who didn’t like hearing Dexter talk? Especially, when he called his older sister Dee Dee, “stoopid.” This particular episode focused less on the squabbling siblings and more on Dexter’s pet monkey, Monkey. Dexter wonders if anything great will ever come out of his pet monkey or if he will remain  just another domesticated pet. We then see an alternate universe in which Monkey is summoned to a Hall of Justice-like headquarters for the Justice Friends, the bootleg Avengers super heroes, Like Major Glory and Van Hallen. These heroes are confronted by a sleazy fly who happens to promote intergalactic professional wrestling, and does commentary alongside Vince McMahon bootleg Mike Man.

The fly challenges them to battle the intergalactic wrestling champion Rasslor, voiced by none other than the Macho Man Randy Savage. With no other alternative but to accept the challenge, the super heroes do battle with Rasslor one by one; each failing to defeat Rasslor. The moves are cartoonish as you would expect from a children’s cartoon featuring pro wrestling, but a lot of the tropes associated with wrestling are showcased quite nicely. Like how the crowd automatically starts chanting U-S-A as soon as Major Glory takes to the squared circle. Even the announcing is pretty spot on. Hell, I”m pretty sure Macho Man improvised most of Rasslor’s promo. Eventually, Rasslor disposes of all the heroes until only Monkey is left. Rasslor laughs at him and makes quick work of Monkey, only to have Monkey come back and keep putting up a fight. Granted, Monkey’s defeated over and over by the much larger Rasslor, but like a true underdog, Monkey just doesn’t quit. It kind of reminded me of when Big Bossman and Albert beat the crap out of Tazz at No Way Out 2000, back when the WWE actually cared about making Tazz seem like a legit bad ass, despite being like 5 feet tall.

Unlike Tazz, Monkey was eventually put over by Rasslor. No, Monkey doesn’t actually win unless you count winning over Rasslor and gaining his respect. Rasslor acknowledges his scrappy opponent’s courageous efforts and sings his praises as only the Macho Man can and capping it all off with an “Oh yeahhhh!”