Oftentimes, a foreign wrestler who has such a strong hatred for America that it could only be remedied by moving to the U.S., joining the WWE, and fighting American wrestlers in American cities, with the occasional tour to other countries where they’re still booed, will sometimes turn babyface once they realize that America isn’t as bad as some people make it out to be. Usually, the foreigner’s xenophobic stance on American culture is gradually pacified by an American friend. Or, in the case of Tajiri and Kozlov, someone who speaks English better than they do. More often than not, despite how talented the wrestler is, assimilating to American culture means letting your guard down and becoming the comic relief. Because when we Americans aren’t busy trying to run foreign people out of our country, we’re usually laughing at them.

Cold War Frenemies
Nikolai Volkoff had a penchant for teaming with other foreigners and causing havoc on the tag team division. Well, with the Iron Sheik he did. With Boris Zukhov, not so much. Losing to The Hart Foundation in 19 seconds at WrestleMania VI certainly didn’t help. It bothered Volkoff so much that he decided to pull a fast one on ‘ol Zukhov and sing “The Star Spangled Banner” instead of the Russian National Anthem before one of their matches. Sensing the Cold War was on its final legs, Volkoff got his shit together and decided to become an American ally. He even started teaming with the one guy who built his entire career on U-S-A chants, “Hacksaw” Jim Duggan. They had one actual pay-per-view match at SummerSlam ‘90 as a tag team against The Orient Express, and before the match they went ahead and butchered “God Bless America” before the patriotic Philadelphia crowd. Volkoff even led a team made up of other American-friendly foreigners, Tito Santana and The Bushwhackers, as they headed into The Survivor Series. They won their match, but despite his best efforts, Volkoff’s newfound love for America wasn’t enough to keep him employed by the end of 1990.

Vladimir Kozlov was the new-age Nikolai Volkoff and came in utilizing the same pattern that Alexander Rusev is now employing. Sort of. He did beat a crapload of less superior wrestlers week after week, but unlike Rusev, he was rushed into the WWE Title picture during Triple H’s time slumming it on the SmackDown brand. It was obvious that Kozlov wasn’t ready and after being transferred to the bastardized ECW, Kozlov found himself on Raw teaming with Santino Marella. Granted, Marella isn’t American, but if you’re going to take lessons from any foreign wrestler who has gotten over in American soil it might as well be this guy. Unfortunately, it required Kozlov’s integrity to suffer, but then again, this is wrestling. No longer a Red Menace, Kozlov was now making funny faces and doing silly dances alongside Marella. Hey, it got him a tag team title run. And, as I noted earlier, if you want the American people to accept you despite being of a different nationality, the best thing to do is to make them laugh.

I would throw out an honorable mention towards Nikita Koloff’s way, but that dude wasn’t even Russian. And, really, when he did turn face it’s not like he was incorporating American cultural traditions like singing The American National Anthem or laughter.

Asian Assimilation
With the recent signing of puroresu bad ass KENTA, many are fearing that the WWE might drop the ball with him and he might go the way of Yoshi Tatsu or Mistico/Sin Cara. While Asian wrestlers have experienced far less success than their black or Latino counterparts, there have been some that have been some superstars who didn’t get lost in translation.

Taka Michinoku was originally brought into the WWE to put over The Great Sasuke and help build the WWE light heavyweight division around him. Things didn’t work out with Sasuke and the WWE was forced to make lemonade out of Taka. He was talented enough, but like a lot of things the WWE doesn’t like to admit to, they had no idea how to book a solid light heavyweight division. In an effort to make Taka three dimensional they had his old buddies from Japan, Kaientai, attack him and start a feud with him. Their reasoning? Taka had become too Americanized. Even though Kaientai themselves looked like the Japanese version of Raven’s Flock. And late 90’s grunge is about as American as you can get. Although, to their credit, Taka was learning to drive and being introduced to several types of cancers via cigars. Which I guess is also as American as you can get? Maybe the fact that he was doing these things with Blackjack Bradshaw, AKA JBL, is what pissed them off. Because if there’s anything more American than late 90’s grunge, it’s a giant Texan cowboy. In the end, Bradshaw’s attempts were futile as Taka turned heel, jointed Kaientai, and would eventually peak assuming a more comfortable, stereotypical role: cutting promos in Japanese with English audio dubbed over them. They were funny though.

Tajiri is probably the most successful Japanese wrestler to step foot inside a WWE ring whose name isn’t Mr. Fuji or, if you want to kayfabe it, Yokozuna. He never won a world title or enjoyed a main event run, but he won the fans over with his impressive moveset and, more importantly, his comedic skills. Inside the ring his educated feet were hard to match and his combo kicks looked downright brutal at times. Outside the ring was a different story. While playing assistant, or house boy, to Commissioner William Regal the pair were a grappling Abbott and Costello. And while you might argue how a British wrestler might’ve helped assimilate Tajiri to American cultural customs, let’s not forget that William Regal spent a good amount of time tagging with Bobby Eaton in WCW. And Bobby Eaton is pretty much a walking encyclopedic entry of everyone’s assumption of an average American Southern boy. Who just happens to be good wrestler. Among holding the tag team titles, Tajiri and Regal provided some of the funniest moments on WWE TV with their backstage skits, like when Regal was pumping up The Undertaker and Kane for their match against The Dudley Boyz. And even though I couldn’t find it anywhere online, we can’t forget Tajiri’s debut on commentary when all he did was repeat famous J.R. sound bytes in multiples of three. Barbecue sauce! Barbecue sauce! Barbecue sauce! 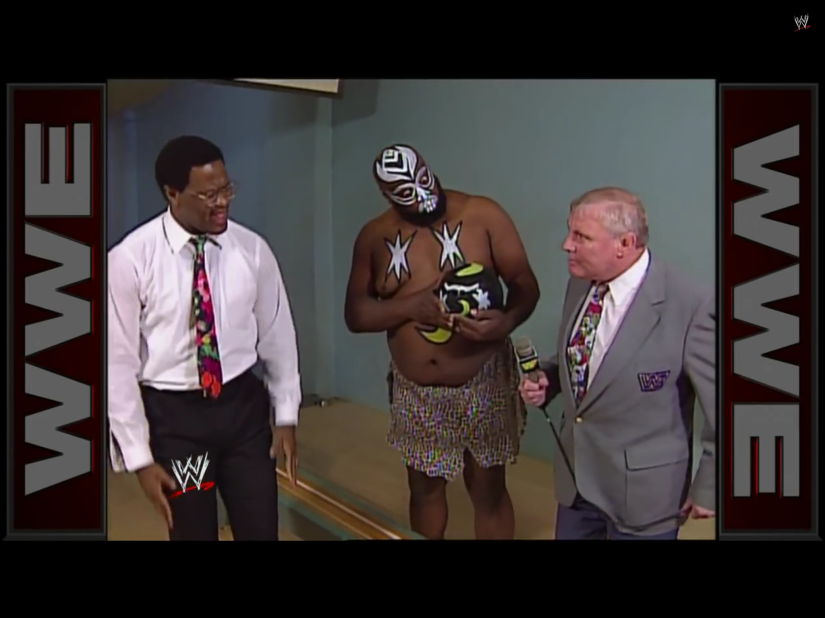 Other
Okay, now I know I mentioned that Nikita Koloff would be off the list due to actually being American, but a lot of it had to do with his on-screen Russian persona not doing anything remotely American to be mentioned anyway. On the other hand, we have Kamala The Ugandan Headhunter, portrayed by Mississippian James Harris. Unlike Koloff, when Kamala turned face and was taken under the wing of one Reverend Slick, attempts were made to civilize him. And by civilize, we all know that means Americanize. Hell, in what other country does it mean to be civilized by knowing how to bowl? Only in America, baby.

The Great Khali was signed to the WWE to extend their global reach and draw bigger crowds in India. He was brought in as this huge monster and was even given a world title run. Not long after they realized The Great Khali was never going to improve, they figured India wasn’t worth the hassle and The Great Khali became a dancing fool. He danced with Hornswoggle and Natalya like some new-age Oddities group, which was just mean to Natalya. Then he introduced the Khali Kiss Cam in which he would force women against their will to kiss him. And where was the kiss cam first incorporated? Right here in the United States during games of America’s favorite national pastime: baseball.

Most recently, the assimilation of the foreign wrestler took a radically different turn. All thanks to Zeb Colter. With Cesaro having immigrated to the United States legally, and legit-winning a green card lottery for permanent residency, Colter proclaimed him a Real American. No longer was Cesaro a condescending European who looked down on American culture, he was now a condescending European who sided with an extremely racist Tea Party member caricature who was anti-illegal immigration. Since he wasn’t making us laugh (Colter was busy taking care of that) and we no longer wanted him out of our country, Cesaro’s Americanized turn was definitely a unique twist on this gimmick. And, unlike the aforementioned foreign wrestlers, he technically did it as a heel. Yet, he would “We the people!” and we’d “We the people!” right back at him like sheep. Swiss loving sheep.

Let’s hope this continues a trend in the assimilated foreign wrester gimmick. But if KENTA does go from being a bad ass to playing a comical Kato to John Cena’s Green Hornet, at least take solace in the fact that it could always be worse. Like, Yoshi Tatsu worse.

2 thoughts on “The Assimilated Foreign Wrestler”