Playing dress up is part of the fun of being a professional wrestler. Hell, it’s part of the fun of being a professional wrestling fan. But it’s even more fun watching other wrestlers as their rivals mocking the way they dress and/or talk. In reality, it’s not that hard to impersonate a wrestler. Pro wrestlers are relatively one-dimensional cartoon characters. They oftentimes wear the same clothes and spout out memorable catchphrases. So, in the spirit of it being October and with Halloween and all, let’s look at some of the best moments in wrestlers dressing up as other wrestlers history.

Honorable Mention: Brian Pillman as Ric Flair
Brian Pillman was once again ahead of his time here. While he didn’t fully commit to the look the way Kevin Nash did in playing Arn Anderson years later, or get the actual speech down, Pillman’s parody did what any good parody should do: lampoon the subject. And lampoon he did.

10. Mr. Anderson as Sting
Mr. Anderson did a bang-up job as old-school Surfer Sting. It finally gave Mr. Anderson’s hair purpose. His intention, as it is with any parody, was simple: to make fun of Sting’s old gimmick. But Surfer Sting was awesome. I’ll give Anderson points for yelling out “Whooo!” and exclaiming “It’s showtime!”, but what should’ve been a one-time deal dragged on for too long. Battling Eric Young, dressed as The Not-So-Great Muta, was cool, bringing out Disco Inferno to chat about what kind of person Sting really is was lame. He couldn’t have gotten an actual friend of Sting’s, like Lex Luger, or RoboCop?

9. Paul Heyman as Paul Bearer
Paul Heyman didn’t have to do much here other than wear the Paul Bearer getup and hold the urn up high. It’s bad enough the death of Paul Bearer had to be a major part of the Undertaker/CM Punk feud, so thankfully not much more needed to be done. Sadly, anything goes in pro wrestling and not much is off-limits. Even sadder, the death of Paul Bearer added another dimension to this feud which it badly needed after a lackluster jumping-off point. This segment worked for all the wrong and right reasons.

8. CM Punk as Jeff Hardy
Punk didn’t have to do much once he got inside of the ring and got a hold of the mic. He didn’t need to. Jeff wasn’t known for his promo skills or catchphrases. He was known for his all-around presence. A big part of that was his entrance. Which Punk nailed brilliantly. He did the dance moves and the mannerisms and the crowd obviously lost their shit initially thinking that it was really Jeff Hardy. Then the harsh reality settled in. Heel CM Punk was awesome.

7. The nWo as the Four Horsemen
While Pillman’s Flair impression was the first actual wrestler parody segment, this was the first to truly commit to it as a performance piece.  While this was clearly an era rife with wrestlers with catchphrases, Arn wasn’t really one of them. The main thing he did was gesture the number four with his hands. So Nash decided to reinvent Arn as an alcoholic womanizer. This supposedly didn’t sit well with Ric Flair, but he was probably more pissed about X-Pac doing a pretty solid impression of him. I mean, Ric Flair is in the top five of wrestlers that most people can do an imitation of. Except for Pillman. I was just disappointed that they didn’t let Konnan McMichael talk. Because if ever there was someone who you can make fun of for the way they talk, it’s Steve “Mongo” McMichael. 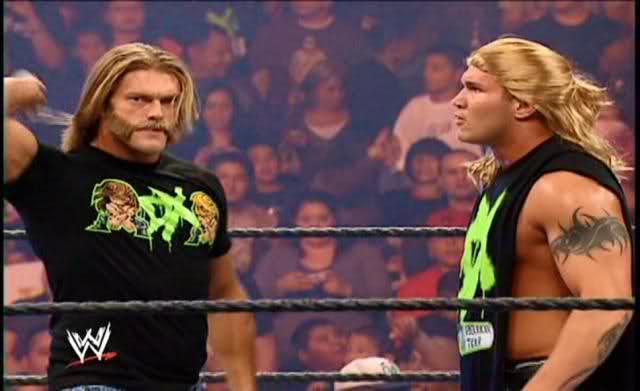 6. Rated RKO as DX
Edge and Randy Orton didn’t spend too long mimicking Triple H and Shawn Michaels. They got their poses out of the way and then lambasted “you people” for cheering guys in their 40’s who still think making unfunny dick jokes is funny. Edge and Orton, or rather mostly Edge, was not only being pretty meta, but also on point. Dressing up as DX and then dissecting why fans cheer for the stupid things DX do and say was great. Until the actual DX came out and basically made lame dick jokes about Edge and Orton. Funny,  when DX parodied other wrestlers they were never confronted by said other wrestlers. But as soon as the shoe was slightly moved to the other foot they had to come out and make sure they got the last laugh.

5. DX as the McMahons
I stand corrected from my previous entry. Not only did the McMahons come out and confront DX, but so did The Spirit Squad. The only thing is this confrontation ended with the McMahons and The Spirit Squad getting shit-slimed. Because DX always gets the last laugh. It’s only fair. They’ve been cool since 1998. Before all this went down though, Triple H and Shawn Michaels did do a pretty damn good imitation of the boss and his son. Which again isn’t that difficult when their persona not only lends itself, but was made specifically for that kind of thing. I’m also pretty sure seeing Triple H cosplay as him brought a tear to Vince McMahon’s eye as he secretly wished that Shane had also been born a girl.

4. Kurt Angle as John Cena
While it didn’t include his classic freestyle rap from his previous confrontation with John Cena, Kurt Angle was in top form once again doing one of the things he did better than most WWE superstars other than wrestling. Comedy. A lot of older wrestling fans mourn freestyle rapping John Cena because he was so cool and edgy. And he was. But as talented and edgy as he way, people forget he was still a white dude doing an over-the-top rapper gimmick. Which is incredibly easy to mock and make fun of. Angle had a lot to work with during this segment and he pulled it off. Angle was so committed to the part he even had a mini Kurt Angle come out to easily dispose of Kurt Cena. WWE Kurt Angle doing comedy was much like his Olympic medal. Gold. 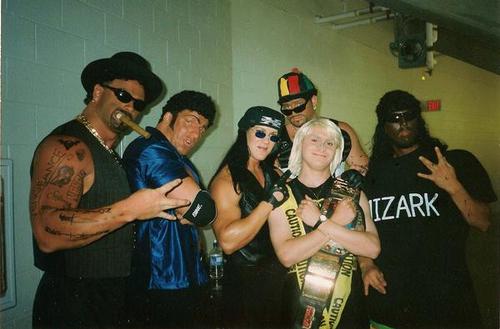 3. DX as the Nation
I like how when this segment is referred to no mention is made whatsoever regarding the fact that it’s a group of white guys in blackface. Only in the world of professional wrestling can a man who once made dick jokes and wore black face be the COO of a publicly traded company. It’s not the worst thing Triple H did to the black community, that would happen later on in his feud with Booker T. Racial insensitivity aside, this segment is often referred to as one of the standout segments of the Attitude Era because it was funny. The guys went above and beyond (obviously) to mock every trait of the Nation of Domination. And it paid off.

2. Kevin Nash as Sid Vicious
The best part about this schtick was Sid coming out to confront Nash and nailing the true essence of being Sid Vicious: fucking up your lines. While Nash did a good job getting down the cadence of Sid, he simply stated outright as Sid that he was a dumbass. While the real Sid Vicious showed up to actually prove it. It’s like he didn’t like the impression Nash was doing of him and decided to show him how it’s really done. The funniest part about this is that the entire point of Sid coming out to confront Nash was because he was sick and tired of being made to look like a jackass. Then he opened his mouth and further perpetuated that perception.

1. Shawn Michaels as Hulk Hogan
Whether or not he was simply playing the role as the heel they wanted him to be in his feud with Hulk Hogan, Shawn Michaels didn’t pull any punches with his imitation of Hulk Hogan. Aside from capturing the look, mannerisms, and sayings, Michaels also decided to incorporate real-life traits like Hogan politicking to get what he wants, and being a lazy worker by no-showing small towns and only making the bigger shows. Clearly Michaels wasn’t happy with the decision to not trade wins with Hogan and he not only showed it in their SummerSlam match by taking ridiculous bumps, but also in the buildup to the match as seen in this sketch. Like most of these parodies, it started off with the mandatory sophomoric humor (Hogan being a 100-year-old-plus old man), but then made an uncomfortable left turn down worked-shoot road. The most hilarious part of the whole thing, for purely unintentional reasons, has to be Michaels startling the “unconscious” Larry King impersonator when he slams his glasses on the desk.