Long before Bugs Bunny donned a mask and stepped into the squared circle for some slapstick shenanigans, his brother from a Warner Brother, Porky Pig, was the first Looney ‘toon to step into the ring.

All the townspeople are pumped for the night’s big championship match between Man Mountain (the champion) and Hugo Unpronounceable Foreign Name (the challenger). Back in the day, it was mandatory for any fictional depiction of professional wrestlers to include at least one guy who was not American. Not so much as a foreign menace as we were later taught to view these guys, but just as really good wrestlers who happened to be from some foreign country. You can thank George Hackenschmidt for that. Also, it should be noted that all the townspeople are dog people. Porky Pig is the only non-dog animal in the cartoon and somehow manages to live without fear of being eaten.

Porky hitches a ride to the match thanks to the generosity of Hugo. Once the limo arrives to the arena, Hugo steps out and falls down a manhole never to be heard from again. Instead of alerting the proper authorities, Porky simply goes along with being mistaken for the challenger. I’m guessing the wrestling posters and newspapers advertising the match didn’t include any pictures of the wrestlers.

Man Mountain is already in the ring waiting. He’s your typical big, bald-headed, bearded behemoth of a wrestler. He and the referee/announcer are also the only actual human people in this cartoon. Everyone else, including the crowd, are still dogs. No idea what’s going on in this universe. 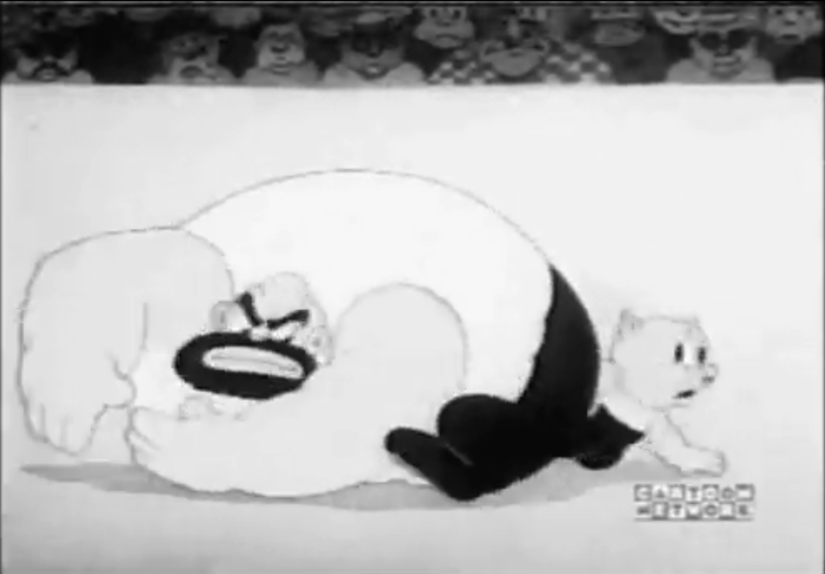 As soon as Porky sets foot in the ring, he goes off on his patented hiccuping yell. Basically, what Curly from the Three Stooges does. He tries to escape, but Man Mountain snatches him and gets to applying wrestling holds we have yet to see in real life. First he rolls Porky into a ball and bounces him around for a bit. Typical cartoon wrestling fare. Then he tries to grapple with Porky on the ground, but is left putting his own limbs into submission holds unbeknownst to him. Classic. 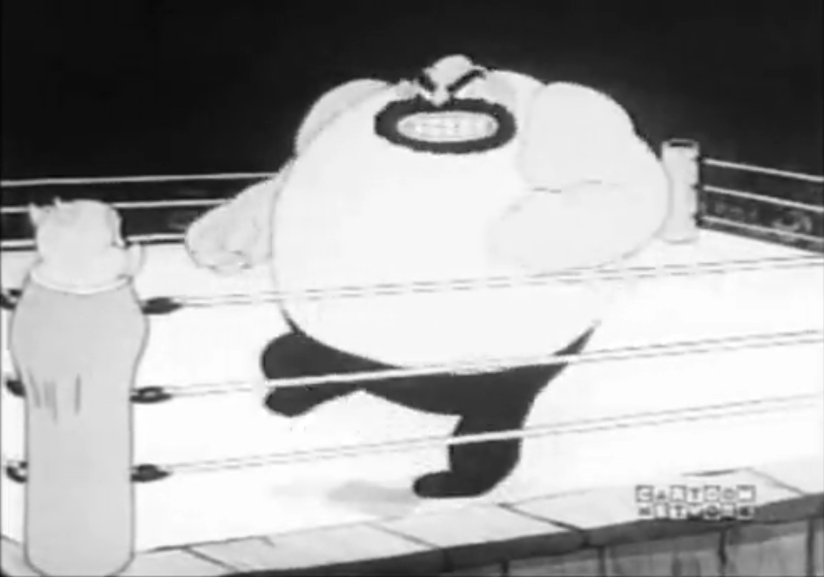 From there, Man Mountain pretends he’s a train, choo-chooing along the ring with Porky and the ref tagging along. Then the champ puts Porky in an airplane spin that twirls so damn fast they form an actual human-pig airplane that takes flight across the arena. It’s one of the better visuals. Back inside the ring, Porky hides under the canvas, but then gets kicked into the post. Man Mountain plays whack-a-mole with Porky’s head and forces his bacon-ass to pop out from the opposite corner, knocking out Mountain from behind. 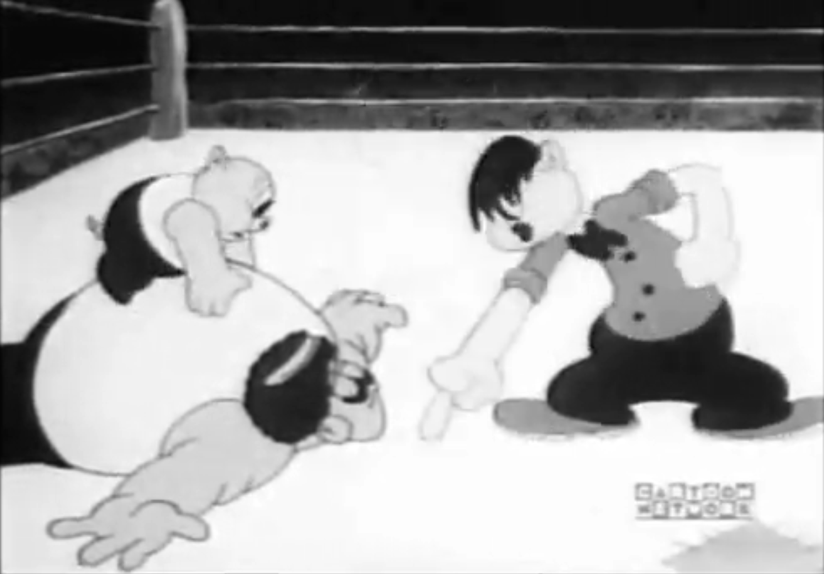 The ref counts to 10, because in a universe where anthropomorphic pigs and dogs interact with human beings anything is fair game. Traditional wrestling rules be damned. And that’s all, folks. No post match interview or big Halloween Havoc ’90 type of reveal that Porky wasn’t Hugo.