This month’s 10 Count will feature the top moments in which wrestlers took matters into their own hands and unleashed their frustrations on upper level management. With this past week’s revelation of The Corporation 2.0, us wrestling fans will witness another boss vs. employee storyline that made the Attitude Era and Steve Austin famous. Despite how many times it’s been rehashed over and over again, from taking on the actual CEO of the company to the assistant to the regional general manager of Raw; anytime a popular wrestler goes up against any figure of authority it’s going to generate instant heat. Granted, I really wish this storyline had been dropped out of the pro wrestling storyline rotation, considering that it spawned the never-ending turnover rate of meaningless General Managers. But this time it’s a fresh of breath air, considering the involvement of head honcho himself, Vince McMahon, and the fact that Daniel Bryan is a superstar on the rise and not an already established one. At least not in the eyes of the WWE Universe. Hopefully we’ll get a few moments in which Daniel Bryan will make the figureheads of the WWE look foolish and get a few Busaiku Knee Kicks in for good measure. I really hope he gets in a few Busaiku Knee Kicks. 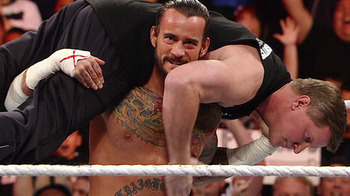 After winning back the WWE Title and becoming another cookie cutter babyface, CM Punk found himself on the end of countless screw-overs thanks to one of the most antagonizing General Managers, John Laurinaitis. It was a perfect storyline to position Punk’s rebellious anti-hero character, but having turned full-fledged face kind of hurt the feud. However, their little spat led to this great meme-generating moment that resulted in Laurinaitis accepting his fate and taking the calmest-looking GTS ever. 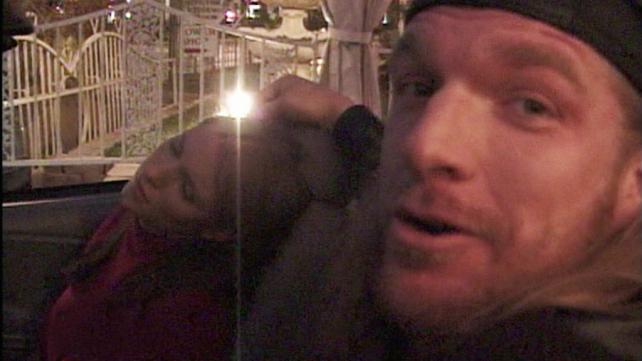 If the movie Old School taught us anything, besides the fact that you’re never too old to go streaking, it’s that the best way to stick it to your horrible boss, is to stick it to his daughter. Yeah, we all saw Triple H simply drug Stephanie McMahon and marry her on-screen, but that’s not what roofies are usually intended for. Considering it was a wedding, a honeymoon was sure to follow. Although not as horrible as the Katie Vick angle, but surely in the top 5 of Triple H’s perverted fantasies, you got to give Triple H credit for thinking outside the box on this one. 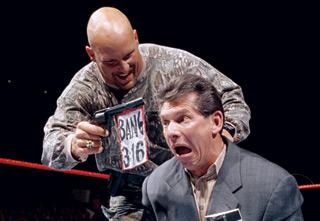 Despite his many failed attempts to venture into other industries, no one can ever doubt Vince McMahon’s commitment to doing all he can for the WWE. The guy has taken his fair share of bumps and bled enough to earn him some hardcore cred. Then again, that goes for anyone who wrestled throughout the entire Attitude Era. There’s also the other not-as-physical stuff he’s done for the company, like shave his head to finally put those toupee rumors to rest, or bare his ass in order to shove it into other wrestlers’ faces, but one of the more crowd-pleasing moments during the Attitude Era was watching McMahon piss himself as Steve Austin held a gun up to his head. Austin had messed with McMahon plenty, but this one truly captured the bat-shit crazy segments WWE was producing during that time period. 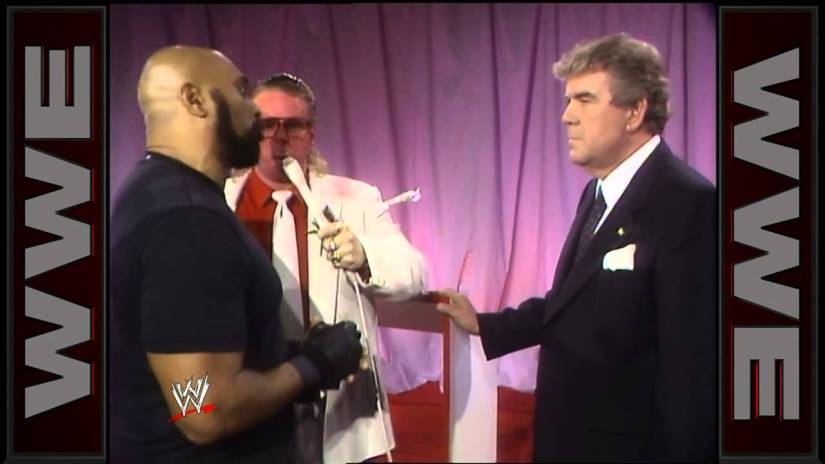 Talk about being ahead of his time. The internet has long speculated that Stone Cold bit Bad News Brown’s gimmick, and after watching this clip you can’t really blame them for thinking that. Bald head, black trunks, not trusting anyone, and confronting the powers that be; that pretty much sums up Stone Cold Steve Austin.  Although at #4 you’ll see the first incident of a WWE Superstar actually attacking a figurehead, this was the first time someone had publicly manhandled a WWE “president”. Unless I did a horrible job researching Wikipedia. If you watch the video, you’ll see that Bad News Brown was simply protecting himself. Tunney’s lucky all Bad News did was wrinkle his tie, instead of Ghetto Blasting him back to Canada. Not sure if Bad News was “fired” or “suspended” for this incident, but after seeing this video, how the WWE never made Bad News Brown the heel and headline a few pay-per-views or, for that matter, deliver on McMahon’s supposed promise of making him the first black champion is beyond me. Unless McMahon was speaking the truth when he said he didn’t want someone like Austin to be WWE Champion, because Austin was basically Bad News Brown and McMahon really is racist or something. 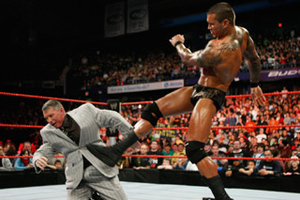 This heel incarnation of Randy Orton was one of his best; a dude who left people contused via a foot to the head. It didn’t really help stir much more interest in another Orton/Triple H feud, but that added move was cool to watch. He was punting people left and right. The punt to John Cena’s dad was pretty good too, but he’s no authority figure. The kick to Mr. McMahon looked solid, and McMahon even sold it for a couple of months before returning to Raw, which is pretty good considering he’s come back after car explosions and stupid set designs crashing down on him. If it’s one thing we can look forward to in a Vince McMahon oriented storyline is the potential beat down McMahon will receive. So, it doesn’t hurt to repeat that I really hope Daniel Bryan delivers a Busaiku Knee Kick to Mr. McMahon. 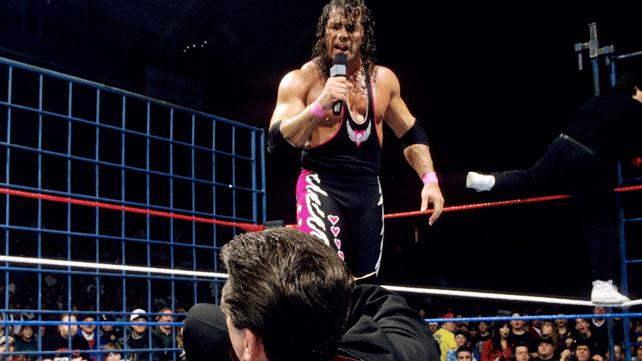 Forget Goldust, Stone Cold or DX in terms of ushering in the Attitude Era, when Bret lost his rematch against Sid, and subsequently his shit, thanks to interference from The Undertaker, Bret let loose on then-commentator Vince McMahon. He even dropped a few choice swear words in for added effect. What had been foreshadowed since Bret’s loss at the 1997 Royal Rumble, when he complained to McMahon, paid off well in this segment which led to one of the best go-home Raw shows before a Wrestlemania. Sadly, this entire feud would culminate 13 years later in one of the worst Wrestlemania showdowns which consisted of Bret slamming a chair over McMahon’s back about 43 times. . . 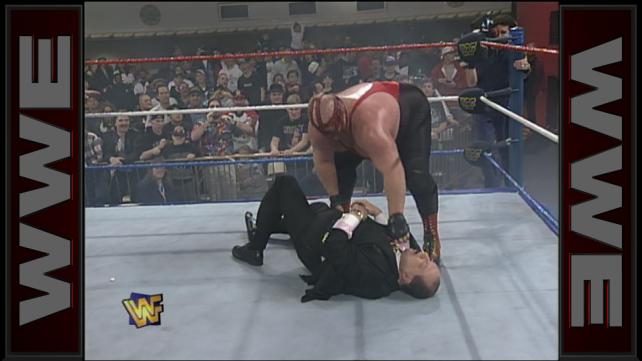 Before attacking wrestling organization figureheads became the norm, the first real attack on someone of high importance was done the day after the 1996 Royal Rumble. Vader had just debuted and instead of letting him tear shit up and win the Royal Rumble, they had him leave his mark the next night on Monday Night Raw. After beating friendly Latino, Savio Vega, and continuing to punish him, WWE President at the time, Gorilla Monsoon, proved to be ballsier than Jack Tunney and chopped the hell out of Vader. Mind you, this is after he reversed the decision in Savio’s favor, so he had already rubbed the Mastodon the wrong way. Monsoon received a Vader splash followed by a Vader bomb for his troubles, as you can see for yourself in this lovely musical tribute done by Justinibummi. 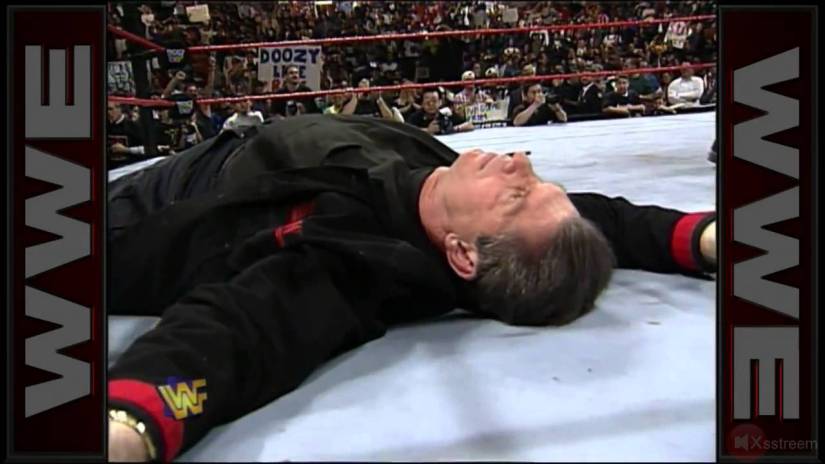 The great part about this was that Austin stunned McMahon before he was even Mr. McMahon. And we all know commentator Vince McMahon deserved a stunner just as much as evil Mr. McMahon. He might not have been assuming the on-air role of CEO just yet, but he was already showing signs of being The Man by pleading with Austin to work within the system. A swift kick to the gut and a horrible-looking stunner later, we were given the first glimpse of a freshly beaten Vince McMahon that would replay on our TV screens for many years to come. 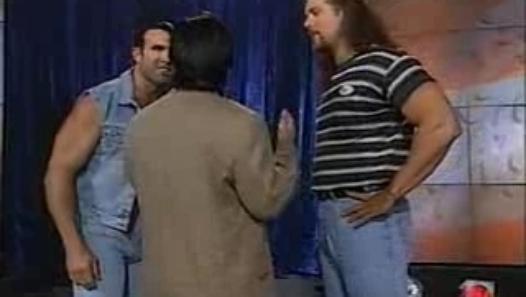 Up until then, the only craziest attack carried out against authority figures were fictional authority figures (Monsoon). In their quest to keep pushing the reality envelope, The Outsiders had pretty much fingered Bischoff as the head of WCW proceeded to not be stars and bully him. And really, who could blame them? Commentator Eric Bischoff deserved a good power-bombing as much as commentator Vince McMahon deserved a stunner. Luckily for Bischoff, he had a strategically placed table to break his fall. It was a great segment and one of the few things WCW didn’t give away for free on TV. I’m pretty sure it helped sell a few more 1996 Great American Bash replays. Okay, maybe a couple more. If anything, it added to Nitro’s ratings the next night and, according to the Monday Night Wars, that’s all that mattered. The Outsider attack was truly a milestone as it set precedence for all company figurehead attacks for the next 17 years. 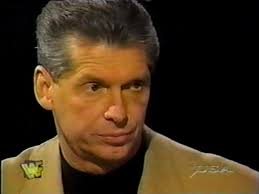 Granted this wasn’t a storyline-related incident, but it quickly became one and cemented Vince McMahon as the magnificent, exploitative, promoting bastard we’ve all come to know and love. And because of that, I don’t have Nailz strangling McMahon on here, although it would’ve been cool if McMahon had appeared on Saturday morning Superstars with a neck brace stating, “Nailz screwed Nailz.” Although the link doesn’t provide the actual video footage of the punch, Netflix instant watch and Hulu Plus have the Wrestling with Shadows documentary where you can at least see McMahon stumbling out of the dressing room after being punched. Beating up the boss has definitely become a go-to wrestling trope crutch at this time, but while the rest of these entries were merely make-believe, Bret Hart actually pulled it off. And was still welcomed back with open arms.