The underdog gimmick has evolved so much throughout the years that it can be divided up into subcategories. Before, a wrestling underdog wasn’t much of a contender and had no real hopes of winning, aside from pulling off an upset or two. Now, the underdog can take the form of a smaller-than-average, but scrappy wrestler with a never say die attitude, to a loveable loser type who fares better in backstage skits, than inside the ring; to a talented wrestler who’s good enough to win, and can, but never gets a fair shake. This post will focus on those wrestlers who were consistently put in David and Goliath type situations (both figuratively or literally), and built careers out of being long-term Davids.

The One-Hit Wonder
Virgil started from the bottom as the bodyguard to the “richest” man on the WWE roster. After years of subordination, he rose up in protest and upset his former boss, The Million Dollar Man Ted DiBiase, for the Million Dollar Championship Belt. This was a big underdog moment considering Virgil hadn’t technically wrestled inside the WWE. But the title reign didn’t last long and neither did his winning streak. Virgil ended up becoming the second coming of SD Jones: Popular enough to have an action figure, but not enough to receive any kind of push. Having been on a losing streak for so long, the chances of Virgil pulling off another upset seemed like a forgotten notion until Bret Hart made him look like a legit contender for the WWE Title on an episode of Superstars. So much so, that it convinced me to move Virgil up in the ranks of my Hasbro action figure wrestling federation.

Unfortunately, after the match Virgil pretty much became a Superstar Jobber, in fact, one of the first ones, paving the way for the likes of Zack Ryder, Santino Marella and JTG. He helped change the landscape of jobbing as the WWE slowly shifted from having superstars beat no-name journeymen to beating established WWE semi-superstars. But before this became the norm, journeymen were still being utilized to put over more established wrestlers. And aside from perennial jobber extraordinaire The Brooklyn Brawler, no other jobber was more memorable than, Mr. Pat Myself on the Back, Barry Horowitz.

Barry received his “out-of-nowhere” win at the expense of Skip AKA Chris Candido. As if the rumors of his wife, Sunny, banging every wrestler backstage wasn’t bad enough, now Skip was losing to jobbers. This sudden push introduced us to the real Barry Horrowitz, a giant nerd Jew, who had taken his style cues from every sitcom geek to ever step in front of the multi-cameras. Ultimately, it seemed Horowitz’ sole purpose was to give Skip something to do until Tom Pritchard came to the harsh realization that Gigolo Jimmy Del Ray was never going to return his calls. Since after his program with Skip, Horowitz slowly faded away as Saturday morning Superstars did, leaving many a journeyman unemployed.

Small, But Determined
The first wrestler to really make a career out of being an underdog and string together more than a couple of wins was the 1-2-3 Kid. Initially, building a steady losing streak, while having interchangeable names ending in Kid, the 1-2-3 Kid was a long shot against Razor Ramon. But then, Monday Night Raw actually became a show where the unexpected might indeed happen. And even more unexpectedly, The 1-2-3 Kid kept winning. And even with a few wins under his belt, The Kid was the most painfully-thinnest wrestler on the roster, jobbers included, which pretty much made him an dark horse in every match. Even against Duane Gill. And especially against Chyna in One Night in Chyna. Once he turned heel and moved on to WCW as Syxx, and back to the WWE as X-Pac, most of the underdog personality was gone. Plus, by then, wrestling had filled up with enough “vanilla midgets” and luchadores that the former 1-2-3 Kid was finally able to enjoy a level playing field. And speaking of luchadores… 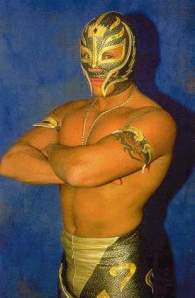 Sure, he went on to win the WWE World Title, and it was only natural that he still walk into most of his matches as an underdog champion due to his size, but man, he could’ve at least won one non-title match. His reign as champion seemed like a fluke thanks to his horrible booking. Proving that the WWE was willing to gamble on a smaller-than-average champion, but not make him the face of the company, which was made even more evident when he later won the WWE Title and held it for about 2 hours. While, you can’t blame the WWE for not making a small guy their top babyface, their was one underdog who had the potential to be the face of the company. 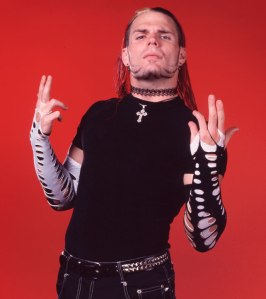 At one point, Jeff Hard was probably the most popular wrestler in the WWE, during two different time periods/eras. He showed guts when he stood up to The Undertaker as he got his ass handed to him during a Ladder Match on Raw. Even The Undertaker as impressed enough to shake his hand. Hell, even Triple H put him over for the Intercontinental Title for a week, but let Edge handle the jobbing when it came to Jeff winning the WWE Title in their Triple Threat Match. To show how much faith the WWE had in Jeff, they gave him the title run after his second wellness policy violation. That’s on some Randy Orton-level of love right there. And, in true wrestling fashion, Hardy’s drug addiction became on an on-air gimmick. Yes, even in his feud with CM Punk, Hardy was the vulnerable, recovering addict determined to overcome his demons and CM Punk. It worked really well. So much so that TNA decided to take it a step further and have Jeff be the fallen-off-the-wagon, shoot on-drugs, underdog in his match against Sting at Victory Road 2011. It didn’t go as well.

The Comic Relief
While wrestling has always provided a niche for wrestlers to show off the lighter side o pro wrestling, few were more comical than the slapstick underdog. Whether he is characteristically unwilling to face his opponents, or filled with a false sense of confidence, the comical underdog is always good for… a laugh. Or, in more recent circumstances, cringe inducing shuddering.

Personally, I was more of a fan of Spike Dudley’s underrated Cruiserweight Title run where he was the brains of the Dudleys. But while in ECW, Spike was the loveable pint-sized goof who went on to become a giant killer much like Rey Mysterio (or before him) and provided the organization with one of their more popular clips often seen in ECW montages: Bam Bam Bigelow hurling Spike Dudley into, like, the fifth row. The WWE found their own version of Spike Dudley during the Attitude Era with Crash Holly.

With his Napoleon complex accurately captured in the form of a weight scale that he brought with him to prove that he was a super heavyweight, Crash was one of the better comical underdogs. Crash was a permanent fixture in the 24/7 WWE Hardcore Title phase that pretty much reduced the title to a running gag on episodes of Raw. It got Crash even more over as a fan favorite seeing as he was targeted by everybody on the roster, and was constantly in hiding or running away to protect the title. His underdog status further cemented by the fact that he kept winning back his hardcore title against all odds, which included wrestling in the ball pit of a fast food restaurant. Not to be outdone, WCW introduced their own hardcore title, and its unwilling farce of a champion, Norman Smiley. 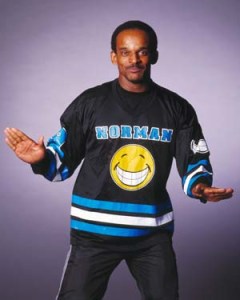 He was technically sound and was a regular in the Lucha Libre scene, but Norman wasn’t brought in for the cruiserweight division, but rather to fill the 60-man quota needed for the World War 3 pay-per-views. But along the way, Norman found himself forced into wrestling hardcore matches, screaming at the sight of the weapons brought by his opponents. Apparently, WCW had just binge-watched a bunch of old Richard Pryor movies where he was always scared and liked it. Still, it got Smiley over.

It wasn’t long until Marella went from unknown badass, to hokey baddie, and finally, loveable loser. During the transition Santino picked up a prop in the form of a socket puppet made to look like a snake, taking a page out of the many books of fellow underdog Mick Foley. As Sanitno’s wins dwindled, he did have some memorable “what if” dark horse moments as he made it to the end of the 2011 Royal Rumble before being eliminated by Alberto Del Rio; and as the final participant in the 2012 Elimination Chamber in which he went toe-to-toe with Daniel Bryan. Let’s not forget that he held the United States Title for a while, which is not really saying much nowadays, but it’s hard to tell where Santino goes from here. When he’s not performing in horrible backstage skits, he’s usually involved with some WWE Diva, as he currently is with poor Emma.

A Fighting Chance
Before becoming wrestling’s ultimate loveable goof, Mankind was able to squeak out a run at the top as an on-and-off again WWE Champion. Despite the childish persona, Mick Foley was pulling off some brutal and violent matches against The Rock. And they complimented each other perfectly. Whereas The Rock was the cool guy who had things come easy to him, Mick was the underachiever who could never catch a break. Even in real life, as WCW tried to spoil his first title win by giving away the Raw results on the air. Little did they know that Mick’s championship win became one of the most memorable episodes of Raw, and not only because he was a long shot for the purposes of the storyline, but because in reality, no one ever expected a guy who looked like Mick Foley to ever become the WWE Champion.

Mankind possessed the ability to balance out this loveable goof character with his dangerous tendencies so that it made sense that he could be a champion under the right circumstances.

No other underdog story in recent history, especially when you consider that John Cena has been the face of the WWE for close to 10 years, has the potential for the biggest pay off at the biggest pay-per-view than Daniel Bryan’s sudden rise to Superstardom. Daniel Bryan has been depicted as every type of underdog. From the one-hit wonder who seemed to peak with a World Title win only to lose it in 18 seconds, to being called a goat and put into silly anger management classes with Kane, because the WWE loves putting Kane in tag teams with smaller wrestlers. And he made those gimmicks and angles work.

But what has resonated the most with fans about Daniel Bryan, much like what drew us in to Mick Foley, is the fact that he doesn’t fit the WWE mold, and despite being good enough to be the WWE Champion has been getting screwed out of every opportunity to do so. He encompasses the shortcomings in life that fans can relate to, and the ones that are forced on him within the confines of professional wrestling due to his size and look. Daniel Bryan has redefined the underdog gimmick and, much like CM Punk, reinvented what the face of the WWE can be if given a chance. He’ll forever be a long-term David and heading into Wrestleania XXX he is going up against the biggest Goliath of them all, the WWE machine. Here’s hoping he gets the payoff that not only he deserves but, as wrestling fans who love a good underdog story, that we deserve. And so that Triple H can finally put someone new over.