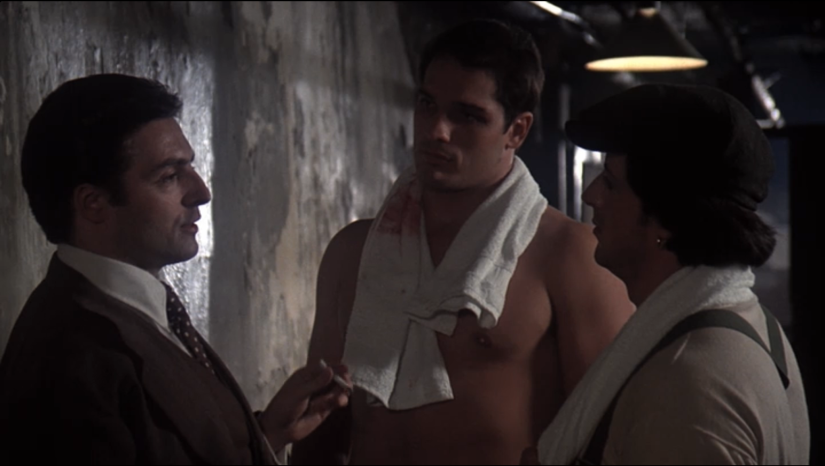 Thanks to his Oscar win for writing and starring in Rocky, an untouchable Sylvester Stallone decided to become an auteur of sorts with regards to films about prize fighters and grapplers. Despite going all-out and not only writing, starring, but also directing, and signing the song in the opening credits, Paradise Alley was definitely no Rocky. This film pretty much explains why Stallone milked the hell out of Rocky. He was a one-trick pony. Nonetheless, not many Hollywood studios were lining up to make movies about pro wrestling. So, we can thank Sylvester Stallone for that. Also, thanks to Stallone, it’d be a long time before Hollywood warmed up to making another one. But I don’t want to rag on him too much seeing as he’s sensitive and all.

The Storyline
Sly plays Cosmo Carboni, the eldest of the Carboni brothers, which includes: Lenny, a sullen World War II vet who now walks with a cane, and their kid brother, Victor, an all brawn no brains type, with a sweet and innocent outlook on life. Which, when you think about it, they might as well have called him Lenny, seeing as he’s basically a rip-off from John Steinbeck’s Of Mice and Men. Cosmo is a street hustler with get rich quick schemes that include doing a dancing bit with a street corner monkey, which is a good indication that Cosmo is destined to be a lifelong street hustler. His brothers, on the other hand, seem content with their stagnant lives.

Complications arise between the two brothers, as Cosmo pines for Lenny’s ex Annie, especially when he gets back with her. Which leads to the film’s most infamous line, marble-mouthed by Stallone, “Hey, I’m sensitive!” It doesn’t last long as Cosmo quickly moves on to a street walker with a heart of gold. But even better than that, Cosmo introduces his brothers to Paradise Alley, a smoky joint where wrestling matches take place. It doesn’t take much to convince Victor to enter the ring. And Victor takes to wrestling rather quickly, during a point in time when it’s still a legit sport and anybody who can hold their own can be a professional wrestler. In your face, Orville Brown! Lenny tags along as Victor’s handler, and the brothers embark on a major four-minute montage winning streak. The end of which results in a double turn for Lenny and Cosmo. Originally concerned with Victor’s health, Lenny is now kind of a douchebag pushing the younger Carboni hard and getting him as many matches as possible so they can all make enough money to get the hell out of Hell’s Kitchen. Meanwhile, Cosmo is worried over the number of fights Victor’s already had, and since wrestling is very much real in this movie, his concerns are valid taking into account the number of shots Salami’s taken to the head, and the fact that he wasn’t the sharpest Carboni to begin with.

The stakes hit an all-time high when Lenny bets their entire earnings ($9,000) against local mobster and constant pain in their ass, Stitch, and his muscle and Victor’s opponent, Frankie the Thumper. The sell-out match takes place at the roofless Paradise Alley in the middle of a rainstorm. It’s an epic back and forth battle that seemingly goes on forever. Finally, the referee/clown announcer disqualifies Frankie after he refuses to let up on Victor at the end of the 22nd round. Stitch quickly gets in the referee’s ear and with little persuasion, not even a gun threat, gets the ref to reverse the decision and declare Frankie the winner. Both sides’ corners get involved and Victor goes crazy on Frankie which causes the ref to reverse the decision AGAIN, this time declaring Victor the winner. And simultaneously destroying any shot of credibility the wrestling had going for it as a legit sport. And finally, for some reason or another, with no foreshadowing or whatsoever, during that last melee Stitch is stripped of his pants revealing ladies undergarments underneath. Women’s panties, garter belt, and stockings, the whole nine yards. Which explains where the WWE bookers got the idea for the Goldust vs. Roddy Piper finish from Wrestlemania XII. It can’t be a coincidence. At least it made more sense with Goldust. With Stitch, not so much. We later find that Victor was planning on throwing the bout, but not until reaching the 22nd round because the 22nd is his birthday. The two older Carboni brothers aren’t upset though because sweet dumb Victor’s reasons that he just wanted it to be like it was back in the day, just brothers. Which doesn’t matter at this point because he’s won the match anyway and they’ve kept their money. They rejoice in their brotherly love as the soothing slurred sounds of Sylvester Stallone’s voice plays us out to the credits.

The movie is categorized as a drama on IMDB, but it feels like its teetering on parody a lot of times. Like a lot. Sadly, the Razzies weren’t around in 1978, but the Stinkers Bad Movie Awards, formerly the Hastings Bad Cinema Society, was and they recognized Stallone’s work by nominating Paradise Alley for worst picture. 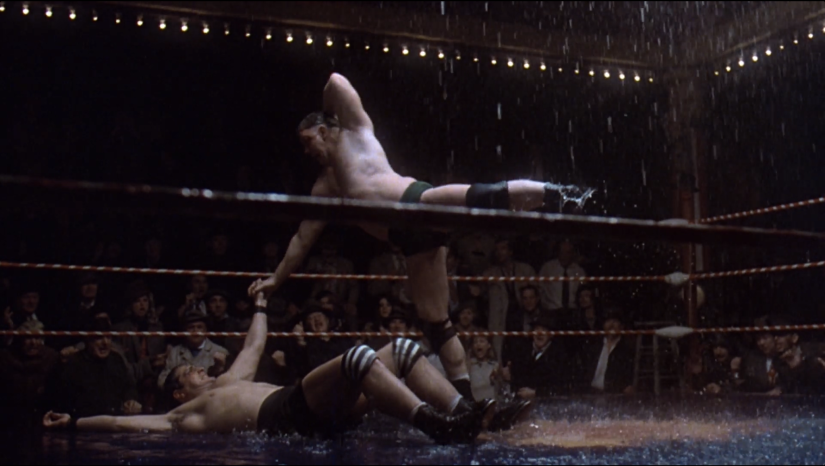 The Wrestling
The one thing this movie could’ve borrowed from Rocky, aside from everything else, was the fact that it could’ve started the same way; with some in-ring action. Instead, we get some foreshadowing of one of Stallone’s future projects, as we see Frankie the Thumper take on Victor in an arm-wrestling match. This movie was off to such a slow start that it took me a while to remember that part of the story had to do with wrestling. But once they get to it they do a pretty good job of depicting the grappling arts. It probably helped that they had a crap load of actual professional wrestlers featured in the movie, and that Frankie the Thumper is played by Terry Funk.

The last match was as good as it gets for climactic, big-time sport sequences. That involve pro wrestling. With Frankie and Victor clobbering the hell out of each other, amidst a rainstorm, complete with thunder and lights flickering on and off. It was also kind of an absurd showing as you’re surely never going to see anything like that in real life, unless you happened to be in San Juan, Puerto Rico in 1985 for Hulk Hogan vs. Big John Studd. Which, as you can see by clicking on the link, was not as exciting as Frankie the Thumper vs. Kid Salami. We get awesome Cesaro-like swings, airplane spins, atomic drops, head-scissor takedowns, submission holds like the Ice Clamp, etc. And with careful editing, bloody make up, and the mere mention that they’ve gone 22 rounds, it really makes you feel like they’ve been beating the shit out of each other for over an hour. The Wrestlers
Not only is Terry Funk in this movie portraying a pivotal character, but it’s also his first feature film role. I always felt Funk’s work in film and TV was constantly overlooked next to your Hogans, Pipers, and Andre the Giants. He was in a lot of stuff. Also, according to IMDB, the movie featured appearances by the following professional wrestlers: Ted DiBiase, Uliuli Fifita, Dory Funk Jr., Terry Funk, Don Leo Jonathan, Don Kernodle, Gene Kiniski, Dick Murdoch, Bob Roop, Dennis Stamp, and Ray Stevens. Most of whom I didn’t even recognize during the montage sequence, but they’re listed on IMDB so it must be true.