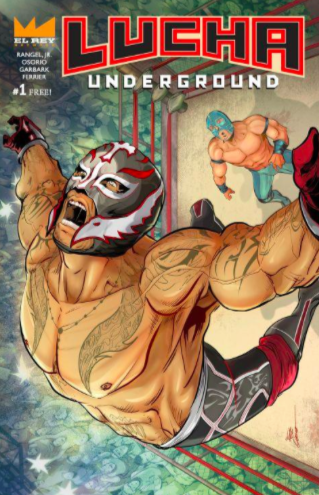 10. Bane – Batman ’66
The original Bane that debuted in the DC universe back in 1993 didn’t really tie in a lucha libre background. Sure he had a mask, and it was alluded to, but there wasn’t an actual issue dedicated to Bane as a luchador. Then came along Batman ’66 capturing all the campy kitsch from the 60’s Batman TV series. It reintroduces Bane as an actual Mexican luchador, who is not only an impressive luchador, but also controls a city and lords over Mexican legends like El Santo and Mil Mascaras. Batman actually helps Mil Mascaras and El Santo defeat Bane! Bane also tries to break Batman’s back inside a wrestling ring, where the backbreaker belongs.
Lucha Underground Counterpart: Matanza 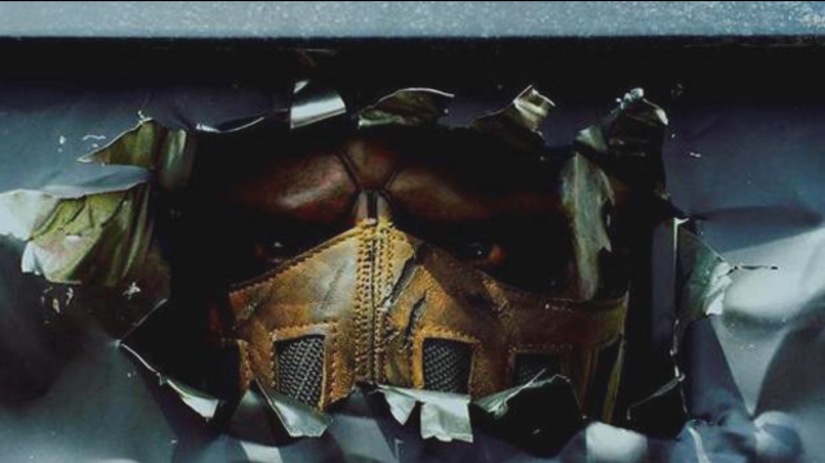 Matanza hasn’t broken anybody’s back like Bane did to Batman in the movie, or attempts to in this comic book, but Matanza did seem to murder the shit out of Bael, one of Cueto’s henchmen. Or, at the very least, rearrange his face so that Bael now has to wear a mask or something. Look for Matanza to make a huge impact on season two of Lucha Underground. 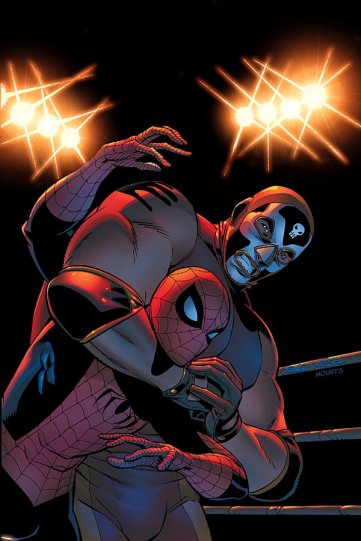 9. El Muerto – Friendly Neighborhood Spider-Man
Consider him a more updated version of Crusher Hogan. Only not as sad. Originally Juan-Carlos, El Muerto comes to be after putting on a mask that gives him super human strength and endurance. In order to earn the mask he’s supposed to fight El Dorado, but refuses to, even though it costs him his dad’s life. El Dorado gives him ten years to train in order to defeat and unmask a hero. It’s not known whether this hero has to be a super hero or just a regular babyface/tecnico luchador. El Muerto sets his sights on Spider-Man, but comes up short. Before El Dorado can take him out for failing, Spider-Man comes to El Muerto’s aid and helps him defeat El Dorado.
Lucha Underground Counterpart: Pentagon Jr.

Pentagon Jr. obviously answers to a higher power, and as we all found out at Ultima Lucha, it wasn’t Pentagon Sr., but rather Vampiro. He also set his sights on destroying a masked hero in Sexy Star, and eventually came up short. But he was able to defeat the higher power that was controlling him. With the cheers he’s received and continues receiving, there’s a good chance Pentagon Jr. might turn face just like El Muerto during season two.

8. The Holy Terror – The Holy Terror
Not to be confused with the Frank Miller graphic novel of the same name. The Holy Terror is the only dude on this list that might not be an actual Mexican luchador. Max Brody, an up-and-coming wrestler, takes on the previously used mask of The Holy Terror and ends up in the same battle against supernatural forces as his predecessor. Ultimately headed towards a showdown with Huehuecoyote, a demonic shape-shifter.
Lucha Underground Counterpart: Disciples of Death

Technically, we’re not supposed to know this, but the Disciples of Death are LU enhancement talent, Argenis, Mariachi Loco, and Ricky Mandel. Then they donned the skeletal masks and became trios champs. Just like the Holy Terror, they’re now condemned to this supernatural world alongside Mil Muertes. Actually, it’d be pretty damn cool if we found out this is how they came to be. 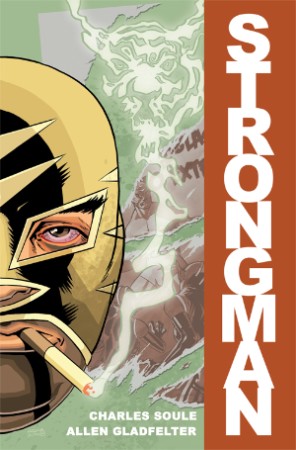 7. El Tigre – Strongman
A throwback not only to El Santo and Mil Mascaras, but also to their b-movies. El Tigre is a washed-up veteran doing jobs at local shows, until he’s called upon a damsel in distress, who may be playing up the part, to help put an end to a corrupt politician. It’s a very basic story, but the creators do an awesome job paying homage to the conventions of the old luchador films without going into campy territory in which they could’ve easily done. Plus, El Tigre comes off just as noble as the luchador heroes of those same films. And is also a bit of a badass.
Lucha Underground Counterpart: Son of Havoc

Much like El Tigre, Son of Havoc found himself doing the job plenty of times at the beginning of Lucha Underground. He also found himself entangled with a femme fatale type (Ivelisse) who he had a tumultuous relationship with. And even though Havoc’s love problems were a bit more dramatic than El Tigre’s, Havoc did find success along with Ivelisse, and Angelico, as the first LU trios champions. For anyone who has actually read Strongman, it’s clear that Tigre’s best years were also fighting alongside his partners, Bujo and Conejo. Also, El Tigre and Son of Havoc have a thing for motorcycles. So, there’s that. 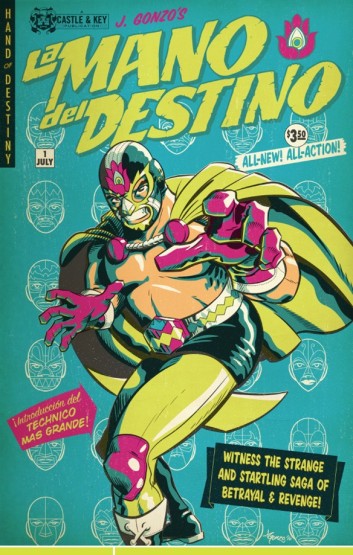 6. La Mano del Destino – La Mano del Destino
La Mano del Destino is a man hell bent on revenge. At one time a decorated champion as Ernesto El General, La Mano refused to do the job and was taken out by both rudos and tecnicos until he was left beat and maskless. Now, as La Mano del Destino, he has struck a deal that has granted him mystical powers, the likes of which no one has seen since Papa Shango. At his side, as he goes on defeating all the people that did him wrong, is his old-man sidekick, Genaro Gonzalez, who’s there to make sure La Mano learns how to harness his powers.
Lucha Underground Counterpart: Prince Puma

While Puma hasn’t been betrayed, although Johnny Mundo did go full rudo on him during their One Fight, One Night iron man match, he is on a mission to win back his Lucha Underground Title. While it’s unclear whether or not Puma has any kind of mystical powers, like La Mano del Destino, they do share one thing in common. They each have an old dude guiding them along the way as they exact their revenge. 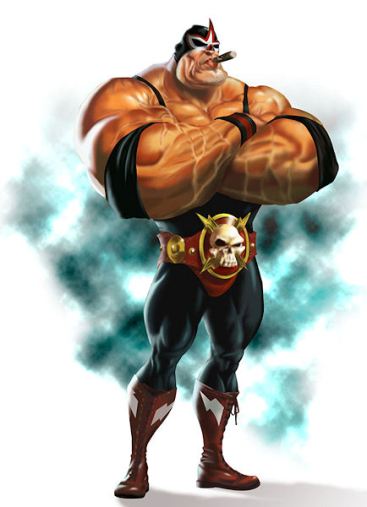 5. El Zombo Fantasma – El Zombo Fantasma
El Zombo Fantasma is what happens to wrestlers after they get murdered for throwing a match. Once a famous Mexican luchador, El Zombo now finds himself as the undead guardian angel of a ten-year-old girl named Belisa Montoya. It’s the the only way he can avoid hell and it also gives him a chance to hunt down the man who killed him.
Lucha Underground Counterpart: Mil Muertes 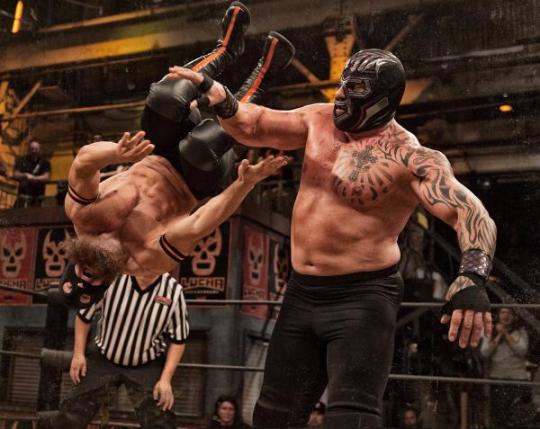 Look at Zombo Fantasma and look at Mil Muertes. They’re both huge, menacing, mea-looking bastards. And even though he’s not really a guardian angel, Mill Muertes does seem to have a special bond with Catrina, his female valet. He definitely goes out of his way to protect her at all costs. Then there’s the whole coming back from near-death experience, be it the 1985 Mexico City earthquake that buried him in under rubble or being shoved in a coffin after his Grave Consequences match with Fenix.

4. Silver Angel – The Strain
Like El Tigre, Silver Angel, or Angel de la Plata, falls into the popular trope of the washed up, has been luchador who’s lost his mask in a bout with depression. He was pretty much that universe’s El Santo, having starred in his own black and white horror movies. During the time that The Strain picks up, Angel finds himself now working as a dishwasher, because despite being a luchador he’s still Mexican. Angel eventually joins up in the fight against Guillermo Del Toro stylized vampires alongside Gus, a fan of his growing up. At least, that’s how it plays out on the TV show, so it’s safe to say it’s probably the same in the comic book.
Lucha Underground Counterpart: Dragon Azteca 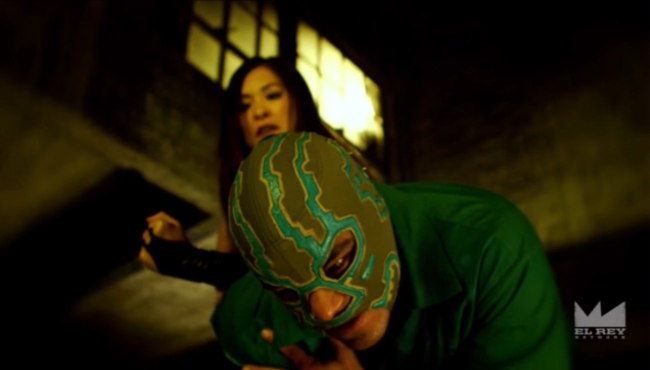 Dragon Azteca is very much a call back to the old luchador films, even more so than Blue Demon Jr. himself. Azteca’s backstory is born out of that world. A blood feud between warring luchador clans. Azteca also finds himself in the role of mentor, having not only trained Black Lotus, who ultimately killed him, but also another protege who now has become the new Dragon Azteca, and will most likely continue his mentor’s feud against the Cueto family. 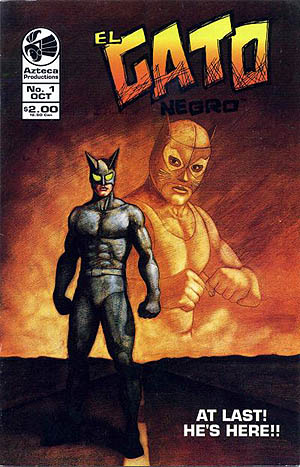 3. El Gato Negro – El Gato Negro
El Gato Negro is the only luchador on this list dealing with more realistic adversaries: drug  cartels. He is a legacy luchador, but doesn’t go by “El Hilo del” or “Jr.”, he just kept the original name. He initially dons the mask to avenge the death of his best friend, but ends up going down the Batman route of ridding the streets of crime. Unlike Batman, he is not on good terms with the cops, and his dead best friend’s older brother thinks El Gato Negro is working with the drug smugglers. Having debuted in 1993, El Gato Negro is one of the original luchador comic book heroes to have his own series.
Lucha Underground Counterpart: Blue Demon Jr.

Bengala would’ve been the obvious choice, but he has no backstory in the LU universe. Puma might’ve been a good choice also considering he’s part of the cat family as well, but he was a better fit as La Mano del Destino’s counterpart. However, Blue Demon Jr. is a masked legacy luchador and also has a color in his name. And even though he wasn’t fighting off drug cartels within the Temple, he was battling a crime syndicate in the form of The Crew, until he ended up aligning himself with them. 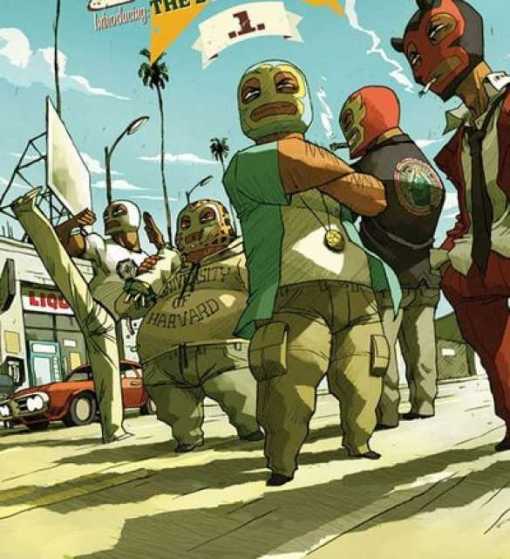 2. The Luchadores Five – Lucha Libre
El Gladiator, Red Demon, King Karateka, Dr. Pantera, and Diablo Loco make up The Luchadores Five. They’re a group of middle-aged Mexican dudes living in East L.A., trying to make ends meet, and also saving the world from the likes of stereo-stealing werewolves, and getting into fights with fellow superhero group, Les Formidables. They’re constantly ridiculed, both by strangers and loved ones, yet that does little to deter them from their crime fighting ways. Unless they get in way over their heads, then El Gladiator has no problem tipping off the cops to help them out.
Lucha Underground Counterpart: Rey Mysterio 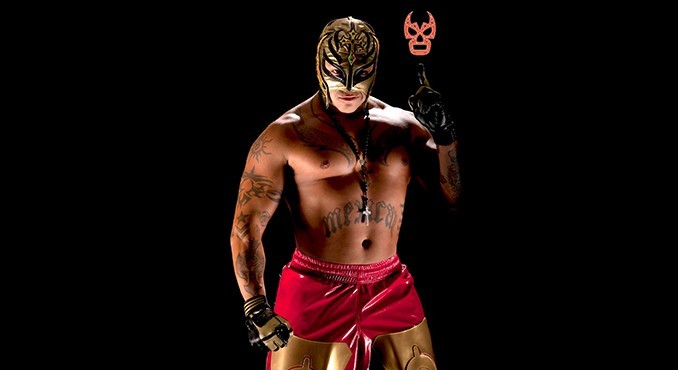 Despite Prince Puma being from the same area as The Luchadores Five, he lacks the same urban feel that these dudes represent. And by that I, of course, mean loose fitting pants. Granted, not a whole lot is known about Prince Puma. Rey Mysterio, on the other hand, started coming out to rap music, spoke Chicano slang words, and distanced himself from the traditional luchador look that wasn’t based on tigers or mental illness. Mysterio was the first luchador to truly update the style of the luchador to represent the young American Latino/Mexican vibe that you’ll find in most urban cities. Unless you count Super Calo. That guy knew what was up way back then. 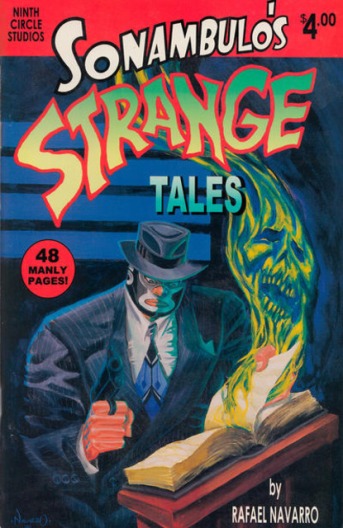 1. Sonambulo – Sonambulo
After being shot and left for dead by the mafia, famed 50’s luchador Sonambulo wakes up 30 years later with the best form of insomnia, never being tired. Instead, he has the power to see other people’s dreams. Naturally, Sonambulo becomes a private detective, keeping true to his 50’s noir roots. But he doesn’t take on cases involving priceless bird statuettes, or the California Water Wars, he deals with supernatural forces. This is a luchador comic book, after all.
Lucha Underground Counterpart: Fenix

Of course, it’s Fenix. Even though Mil Muertes technically rose from the dead as well, in this case, Fenix was left for dead by death incarnate himself, Mil Muertes. And by that, I mean Fenix was powerbombed through the damn roof of a building by Mil Muertes. And he still rose from the ashes. Reborn again, somewhat like Sonambulo, only instead of being able to see other people’s dreams he won the Gift of the Gods Championship, Fenix once again proved himself a top contender for the Lucha Underground Title. And he established himself as an even more dangerous threat to the man that holds the belt heading into season two, Mil Muertes.