With International Women’s Day having just passed, and it being National Women’s History Month, I realized I could do more to spotlight the representation of women’s wrestling (both good and bad) in pop culture. And wouldn’t you know it, there’s enough TV episodes featuring women wrestling to make a top ten list. These are the best ones.

10. Small Wonder – “Wally the Wimp”
Jesse “The Body” Ventura happens to stalk his old college cheerleader buddy, Joan Lawson, back to her home and have himself invited to dinner. Mostly, because Joan wants to teach her ungrateful jerk of a husband, Ted, a lesson for taking her for granted. Jesse impresses everyone with his physique and wrestling, despite Ventura’s wrestling days being pretty much behind him at this point. Yet, Ventura’s ego is severely checked when the Lawson’s robot daughter, Vickie, (this was an 80’s sitcom, after all), decides to hit him with his own finisher. Only in this version, Jesse’s gently lifted up four feet in the air and dropped onto a pretty comfortable looking couch. Still, it’s a pretty impressive feat for a 12-year-old girl, even for one who has a circuit board implanted in her lower back. 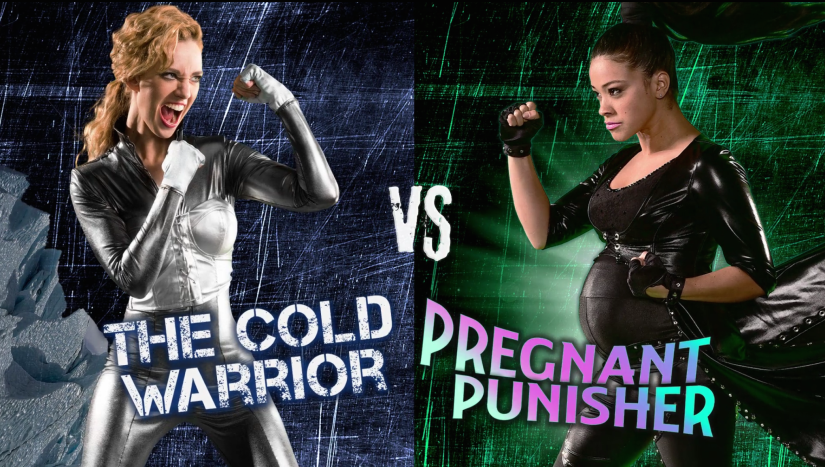 9. Jane the Virgin – “Chapter Twenty” (full review)
Despite the main character, Jane, being pregnant, she’s still able to get in the squared circle and attempt to settle her telenovela-like beef via a fantasy sequence. That way, using your pregnant belly as a weapon to defeat your opponent won’t cause any long term effects to the baby’s health. The show does involve an actual wrestling exhibition held inside a hotel that features two female wrestlers who are big fans of alliteration, Candy Crunch and Juicy Jordan. Although not much attention is paid to the match by the show, until the finish. Still, This episode gets bonus points for giving most of the main characters wrestling egos and their very own versus matchup graphics.

8. Sabrina the Teenage Witch – “Salem’s Daughter” (full review)
After somehow getting dragged into being a maid of honor for her cat’s daughter, Sabrina finds out that weddings are done a little differently in the Wiccan world. Instead of it being dark and all Gothic, it’s actually a lot more colorful and involves having to wrestle the groom’s father. You would think that it would be against the best man because that makes more sense. The groom’s father happens to be Billy Gunn, and in full Billy Gunn attire, too. Well, aside from the imprinted lips. Surprisingly, the match doesn’t involve any kind of spells or broomsticks as foreign objects, just Billy Gunn beating the ever-living crap out of a high school kid. But Sabrina puts up a good fight and is able to hang with The Ass Man.

7. Fuller House – “The Legend of El Explosivo”
All grown-up DJ Tanner-Fuller, and her boys, end up at an even kitschier version of Lucha Va-Voom called Lucha Kaboom. It’s also the more kid-friendly version. Despite not knowing how anything in wrestling works and having her sister, Stephanie Tanner, explain it to her, DJ still ends up being one of the better female character grapplers in a wrestling episode of a TV show. She not only pulls off wrestling moves, but she pulls off lucha libre moves which is fitting considering the type of wrestling that’s taking place. She performs half of the former Sin Cara’s La Mistica, without botching it, and after a second-rope splash, finishes off one of the Pollo Locos with La Magistral Cradle. Even The Undertaker almost broke his neck attempting that move.

6. Charmed – “Wrestling with Demons” (full review)
In this Loser Goes to Hell match, the more famous of the Charmed sisters, Shannen Doherty and Alyssa Milano, Prue and Phoebe respectively, end up taking on demon versions of Booker T. and Scott Steiner. Sadly, the demon versions of these WCW wrestlers look just like their human counterparts. Much like the other witch match from this list (#9) , there are no spells or other witch-like shenanigans, but Prue does bust out some Matrix style martial arts moves that no actual human can pull off. Aside from wrestling demon grapplers twice their size, the sisters also have to deal with the fact that their sister, Piper, is killed during the match. How’s that for overcoming the damn numbers game?

5. Mama’s Family – “Mama Mania” (full review)
If there’s one other recurring theme on this list, other than female TV characters wrestling, it’s the fact that these female TV characters who find themselves wrestling are also winning their matches. Which is the case with this episode of Mama’s Family, where elderly matriarch, Thelma Harper, and her daughter-in-law, Naomi, find themselves replacing another female tag team and end up beating their opponents who are double their size. This is also the most sitcomy of episodes in that there are several hijinks and people getting knocked out accidentally. Basically, this is the one episode that will challenge you the most when it comes to suspending your disbelief in the name of pro wrestling.

4. Roseanne – “Roseanne-Feld” (full review)
Poor Aunt Jackie. The younger sister of Roseanne usually found herself in some uncompromising situations throughout the series, so it only seemed fitting that if any of the main characters was going to end up in a wrestling ring, it’d be her. And without any doing on her part. After being randomly drawn from a list of names, Jackie proceeds to get her ass handed to her by the Black Widow. And this takes place after Black Widow has already made quick work out of actual pro wrestler, Cincinnati Patti DeMarco. And yes, I agree, there should definitely be more wrestlers with names that rhyme with their hometowns. The best and weirdest part of this episode is Jackie living out every wrestling fan’s dream afterward, when she has Black Widow over for coffee at Roseanne’s place. 3. The Beverly Hillbillies – “The Rass’lin Clampetts”
Because the Clampett family are well-meaning “country folk” who are all about helping out their fellow man, it doesn’t take much for them to get swindled by a wrestling promoter and a female wrestler working a country bumpkin gimmick. After giving them a sob story about her family, the Clampetts decide to help out financially. Of course, they get the last laugh when Granny takes offense to all this and decides to handle things herself in the ring. Unlike the typical wrestling grannies we’ve become accustomed to seeing, this Granny isn’t a pushover. Instead, she’s a little ol’ human wrecking machine, easily defeating all the other female wrestlers, including a man trying to pass himself as The Boston Strong Girl.

2. Laverne & Shirley – “Tag Team Wrestling”
What started off as a match for a charity event quickly escalates into a full-on shoot match, thanks to Laverne DeFazio previously calling one of her opponents “banana face.” People were a lot more sensitive to name calling in the late 70’s. To make matters worse, Laverne’s original tag partner (a trained professional) was injured and taking her place is Laverne’s tag partner in life, Shirley Feeney. The wrestling episode from Mama’s Family pretty much ripped off this episode, including a bucket gag, which has no place in wrestling because wrestlers don’t use spit buckets. Unlike the Mama’s Family episode, this match is a lot better and more believable, as far as wrestling goes. The faces get to shine, the heels get their heat, and it ends with a ref bump and Laverne and Shirley using their wits to eventually get the win.

1. My Name is Earl – “B.L.O.W” (full review)
In trying to celebrate female wrestling in pop culture, I’m going to overlook the lame joke that Lady Liberty is aspiring to wrestle for an all-women’s wrestling league called BLOW, and that the promoter may or may not be a pimp. But this episode stands out above the rest for focusing heavily on pro wrestling, and more importantly, because the woman who knows how to wrestle and was properly trained and has been doing it for years, actually ends up winning. However, if you’ve ever watched My Name is Earl, then you know that despite her lack of wrestling training, Joy’s well-documented toughness is reason enough to believe she could push Lady Liberty to her limit.The best bit is watching them air their grievances with one another in between holds, where most wrestlers would normally whisper their next move. Also, somebody goes through a table!